Welcome to my tour stop for Chronicles from Chateau Moines by Evelyne Holingue. This is a middle grade historical fiction. The tour runs March 2-13 with reviews, interviews, guest posts and excerpts. Check out the tour page for the full schedule. 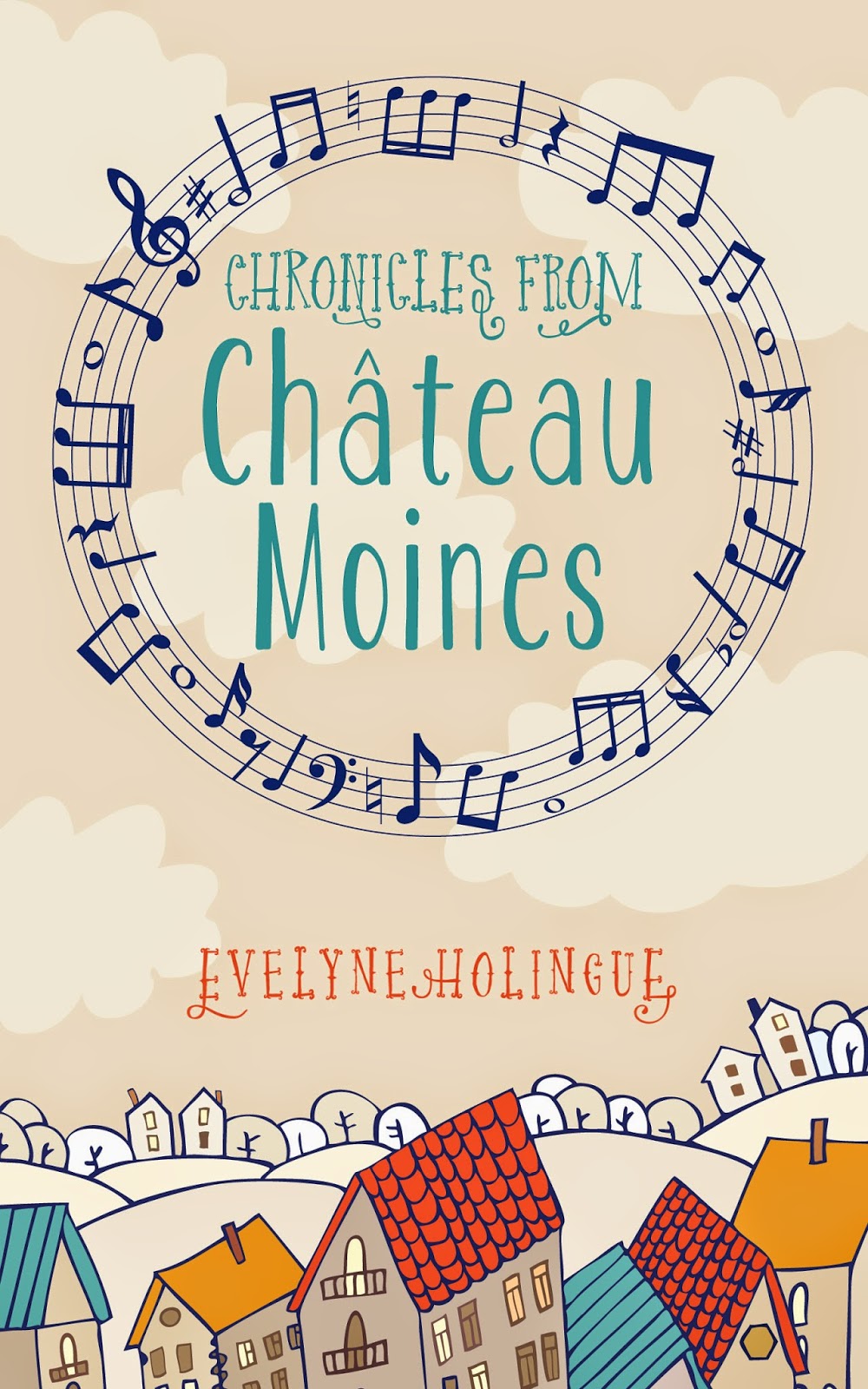 September 1970: Scott’s mother has recently died and his father gets the crazy idea to move his family from California to Normandy. Now Scott has to learn to live without his mom while adjusting to France. In his seventh grade class there is only Ibrahim who comes from another country. Scott doesn’t even want to play his guitar anymore. Why does his father think that life will be better so far from home?

Scott has no idea that his arrival is also a challenge to Sylvie. While her best friend is excited to have an American boy at school, Sylvie cannot say one word to Scott. She can’t even write good songs in her notebook anymore. Why is life so different since Scott moved to Château Moines?

Set against the backdrop of the Vietnam War protest era and told from the perspectives of twelve-year old Scott and Sylvie, this is a story about loss and friendship, music and peace, and also about secrets.

Although this is a work of fiction, the cultural, social, and historical background of the early 1970s in France and the United States inspired the writing. At the end of the book the reader will find a list of the songs, the names of singers, and bands mentioned through the novel as well as some elements about fashion, immigration in France, the Vietnam War, and other cultural, social, and historical facts relevant to the period of time.

I was born and raised in Normandy, France, where I spent most of my childhood reading.
My first published piece of writing was a poem about a man spending Christmas behind bars. I was eleven years old and wasn’t paid for my work, but I was hooked.
I studied French Literature at the Université de Caen and at the Sorbonne in Paris and worked in a publishing house before moving to California, following my husband.
It was a challenging time in my life as I was leaving my own career, my family, my friends and my beloved Paris behind.  But how could I say no to the dreams of the man I love?
Readers enjoy escaping the familiar for the unknown.  Being a foreigner is discovering the unknown day after day, not only for the time of a book. However, since most things in life come with a silver lining, I credit this move for giving me the opportunity to write. Through my words, I share my affection for my native and adoptive countries that I love equally.
www.evelyneholingue.com


How much of the book is realistic?

This novel is inspired by historical, cultural, and social facts of the early 1970s in both France and the USA but remains a work of fiction.
Although I was born in Normandy, raised and educated in France, the small town of Chateau Moines, the characters and plot are the sole products of my imagination.
The library depicted in the novel is the closest to reality. I used to go to a similar one when I was a young teenager. But I never made friends with any librarian and certainly never had a boy from California at my school. Although it would have been really cool!

If you had to choose, which writer would you consider a mentor?

I hope it’s okay to give a little twist to this question.

I love Middle Grade novels and admire too many writers to cite them all. Since I can only choose one mentor I pick Gary Schmidt.
For YA I choose AS King.
I would go anywhere to work with Francine Prose on an adult novel.
And I would be grateful to seek Anne Lamott’s advice for a memoir.

Do you recall how your interest in writing originated?

Books triggered my desire to write. I read more than I wrote for the longest time. As a child I kept a diary and wrote poems. A little later I wrote a fiction story for my younger sister. In two notebooks!  My move to the US changed lots of things for me, except my love for stories. In a strange way this is in English, second language for me, that I started to write fiction. But I think I am and will remain a reader before being a writer.

France and the USA are my two homes on earth. So it’s natural for me to mix French and American elements and to create characters and settings with both influences.
My first two novels are both set in France with main characters from the USA.
I think that the recurrent theme in my writing is home, which is also normal since I left my homeland and often reflect on what home means to human beings.

When I wrote Chronicles From Chateau Moines I had an easy time to switch from American boy Scott to French girl Sylvie. From the moment I started I loved them both as much. I wrote the first draft in many different places, since my kids had weird school’s schedules that year. Cafés, libraries, parking lots, or parks were my desks away from home. Wherever I was Scott and Sylvie seemed to be there with me. I don’t know if I felt being them or if they just took over, but I was able to meet them very quickly whenever I could write.
When I was working on revision my main goal was to make sure Scott and Sylvie had a distinct voice. They helped me a lot, since I heard them talk to each other, to their friends and also to themselves.

Thank you to Evelyne for answering some questions for us all :)

This event was organized by CBB Book Promotions.