Have age spots?  Discoloration on parts of your skin?  Wrinkles or scars?  Want to get rid of them?  Then this is a great product for you - it's packed full of great anti-wrinkle and anti-aging ingredients plus you also get the added benefits of moisturizers like Vitamin C and Hyaluronic Acid!
Posted by Erika Marie at 10:31 PM No comments:

Retinol works wonders for your skin, and this one is very gentle and smooth on your face.  Packed with great ingredients like Vitamin C, Jojoba Oil, Shea Butter and Green Tea alongside the Hyaluronic Acid and Retinol you will feel SO much better after using this.  It really made my skin feel soft and silky, and I have very oily skin on my face and it left me feeling cool and refreshed with no greasy residue.  Comes in a nice size pump bottle with a bright red label and lasts a long time.  InstaNatural has so many great skincare products and they are all such great quality and this one is no exception.  I recommend using several of their products in combination with each other to really enhance your results.  And with the antioxidants in this moisturizer you will start to see the toning and firming of your skin within a few days.  And InstaNatural never tests their products on animals and offer you a money back guarantee with all of their products.
Posted by Erika Marie at 10:09 PM No comments:

Vitamin C can play an essential role in the anti-aging process and it is included in most skincare products today.  But not all of them have enough - Instanatural has created this specific serum that also contains hyaluronic acid, raw stem cells and more to bring life back into your face and help you look and feel younger!
Posted by Erika Marie at 10:04 PM No comments:

Packed with Vitamin C, Niacinamide, Retinol and more, InstaNatural has created a superb serum that makes your skin feel so great and can really pack a punch when it comes to stopping the early signs of aging. But that is not the only issue it helps - if you have discoloration of your skin due to pigmentation or dry skin, this reduces those as well.  There are ingredients in this to help rosacea and acne as well, salicylic acid which is used in acne and blemish creams and scrubs.

As always, InstaNaturals serum is all-natural as the name implies, and comes with a money-back guarantee so you know you will be satisfied or you can return it.  The 1 fl oz bottle has a dropper, and you only need a few drops to work wonders.  The serum is nice and thick, goes on soft and leaves your skin feeling great without a nasty residue.  This also has a nice scent to it as well.  This serum is also good for any skin type, and can be used for men or women.  I also loved this serum because it does not feel greasy on your skin, which is something I absolutely hate.  I am very happy with this product, as I have been with the many InstaNatural products I have tested :)  Give it a try you have nothing to lose except a few wrinkles and redness on your face!
Posted by Erika Marie at 9:51 PM No comments:


***My Personal Review***
Packed with great ingredients like Vitamin C, Niacinamide, Jojoba Oil and Peptide Complex alongside the Hyaluronic Acid you will feel SO much better after using this.  It really made my skin feel soft and silky, and I have very oily skin on my face and it left me feeling cool and refreshed with no greasy residue.  This will help with most common signs of aging like  wrinkles, fine lines, and dark spots.  With the antioxidants in this moisturizer you will start to see the toning and firming of your skin within a few days.  And InstaNatural never tests their products on animals and offer you a money back guarantee with all of their products.

Posted by Erika Marie at 9:43 PM No comments: 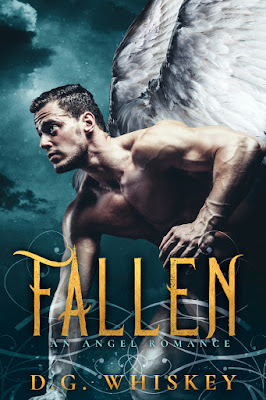 Light and Darkness. Heaven and Hell. Angels and Demons.
Angels haven’t interfered in mortal affairs for two thousand years. For Guardian Angel Alexandriel, that needs to change. When a mortal woman with a strange aura is attacked by demons and Dark mages, he can’t stand back and do nothing any longer. He saves Zara and finds himself craving her, drawn by her unique connection to the Light. As punishment for breaking the rules, he is cast out of Heaven and forced to live a mortal life. Cut off from his powers and his connection to the Light, can he still keep Zara safe? Or will she end up saving him? Shadows stalk Zara Thompson, an unnatural Darkness that blots out all light. Saved by the exquisite and mysterious Alex, she is pulled into a world of magic in turmoil, caught in the battle between the Light and the Darkness. Shocked out of a routine of loneliness and poverty, Zara feels an intense connection with her savior unlike any she’s ever experienced. The greatest surprise of all? She has deep and fascinating powers of her own. 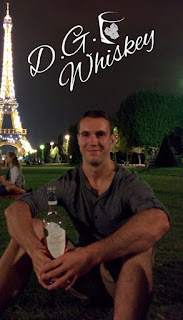 D.G. Whiskey is a world-traveling writer from Toronto in his late twenties who is happiest when exploring new countries and meeting new people. He’s spending the winter writing in South East Asia, gathering inspiration from incredible new experiences. Enraptured by fictional worlds since reading Lord of the Rings at age seven, and spurred on by dozens of bookcases packed with his mother’s fantasy and romance novels, D.G. has been writing stories for twenty years. With a background in engineering and a passion for writing, he’s a firm believer that you should never let yourself be put into a box—you can accomplish anything! Connect on Facebook: facebook.com/authordgwhiskey.
Social Media Links

Really nice 8.5 oz bottle of Extra Virgin Olive Oil which is great for cooking, baking and perfect for bread when you add some spices :)  This is a nice size bottle so it should last you a while even if you use it a lot.  But olive oil brings some amazing flavor to anything you make, I use it all the time! 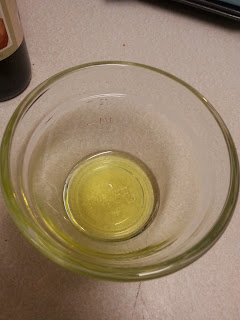 And if you follow the link below you can get 30% off of your order!!!! 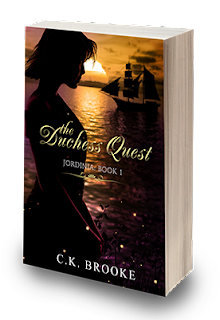 Dainy doesn’t know that she is the lost Duchess of Jordinia, believed to have been assassinated fifteen years ago. Nor does she know that her uncle has implemented an illegal contest to seek her, offering her marriage hand as the reward! Though at odds, three clashing rivals – including a noble giant, a forest dweller and a thieving rake – voyage together by woodland, prairie and sea to recover the lost royal, notwithstanding the assassins and spies at their tail. Soon, young Dainy is swept into a comically complex romantic quadrangle as each suitor competes to capture her heart. Charmingly romantic and bursting with political intrigue, startling twists and vivid characters, readers of romance and fantasy alike will adore this original yet timeless tale of swashbuckling adventure and unlikely love.

The Album
The Duchess Quest also has an original companion soundtrack available, entitled The Duchess Quest: The Album, which is available exclusively on Amazon at: https://www.amazon.com/Duchess-Quest-Album-C-K-Brooke/dp/B01KWB2CHK/
And can be sampled at: youtube.com/+ckbrooke 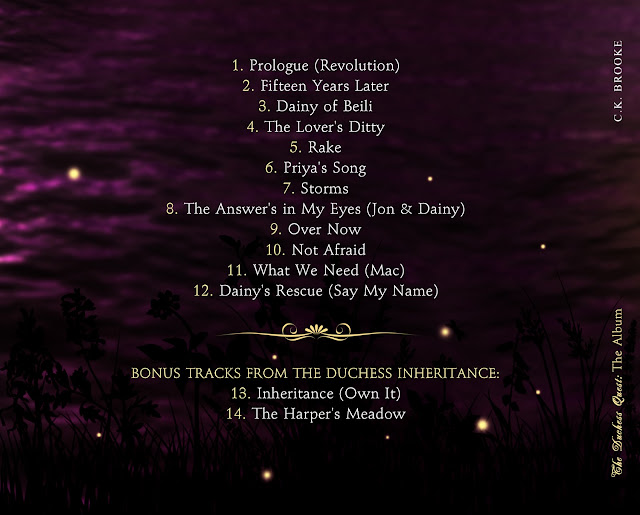 “I’ve never seen a fire spread so easily or so rapidly,” declared Cosmith. “And especially not on such damp soil.” He clenched his jaw. “I smell a rat. This was no accident, my friends. It is chemical warfare. The New Republic is trying to eliminate us who seek the Duchess.”

“They damn near succeeded,” muttered Bos.

“But why would they leave behind their symbol to convict themselves?” challenged young Macmillan.
“Would they not wish to keep an assassination classified?”

“Not if they wish to warn the survivors—us—who we’re dealing with,” said Cosmith shrewdly. “This here?” He tapped knowingly against the symbol carved into the stone. “This is called ‘leaving your mark.’ It’s a Jordinian custom for claiming a crime committed.”

Macmillan raised an eyebrow. “And you would know this how?”

“This does not come as news to me,” interrupted Bos flatly. “The Republic will slaughter whomever they please, however they shall, to ensure their authority and control. It has been this way since they murdered my Emperor.”

“And it appears they’ve set an assassin on our tail,” said Cosmith grimly.

“So what do we do?” Macmillan looked between them.

Bos watched them, the last men standing in their now pitiful search party. “We continue,” he suggested. 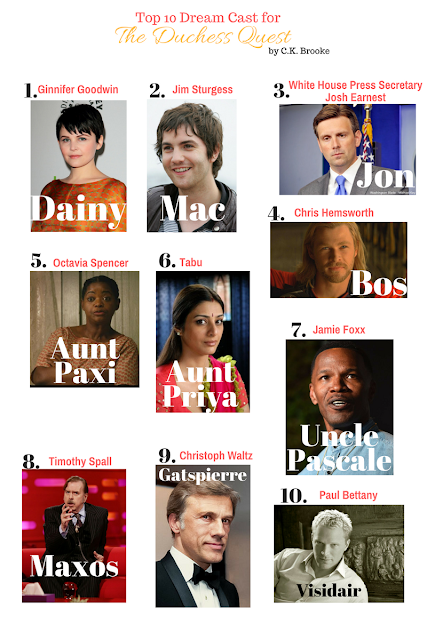 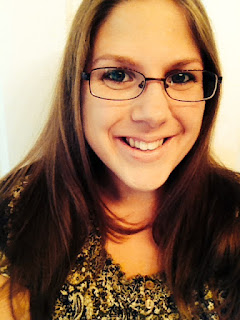 C.K. Brooke is a 2015 Shelf Unbound Notable Indie author with a five-star rating by Readers' Favorite. She holds numerous fantasy and romance publications with 48fourteen, Limitless Publishing, and Elphame Press. Her lifelong passion is books - reading, writing, editing, publishing and blogging about them. When not blissing out in literary land, she enjoys info-tainment podcasts, singing, songwriting and playing the piano. She lives in Washington, Michigan with her husband and young son. Visit her at CKBrooke.com and subscribe for a FREE eBook!

Subscribe to the author’s monthly newsletter and receive a free eBook of The Duchess Quest. 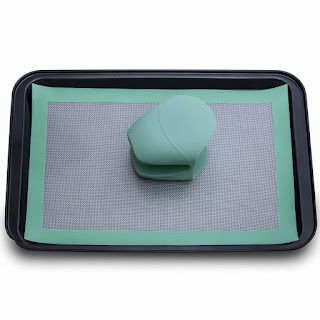 I have come to really love silicone baking ware and so this was awesome to receive!  The silicone mats I have never fit the baking sheet so this is perfect because now I have a very nice cookie sheet that will work with this mat and all others.  Love the color, it's a really pretty teal color and the sheet itself is very nice and non-stick coated.  The oven mitt is really cool, it's one I have never tried before but works great!  It's easy to use and not bulky.  The best part though?  The fact that while using the mat you don't have to use spray on the cookie sheet.  Whatever you make just slides right off the silicone and I hardly have anything burn on it.  It cleans up perfectly and you never have to worry about scratching up the cookie sheet.  Very nice set and perfect for a gift! 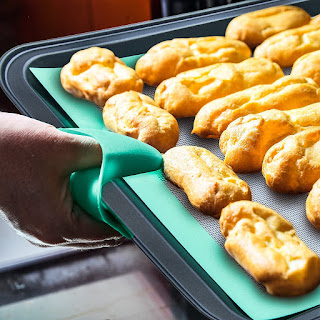