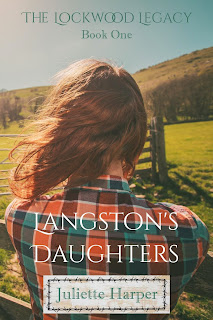 Kate, Jenny, and Mandy. Langston Lockwood’s daughters. His tyranny drove them away. His suicide draws them home. They inherit his land, his millions, and his mysteries. Meet the women of the Rocking L and the men who come into their lives. Together, they begin the journey to discover the truth about The Lockwood Legacy. From the pain of the past they find the strength to build a dynasty.

Juliette Harper is the pen name used by the writing team of Patricia Pauletti and Rana K. Williamson. Like the characters of their debut series, The Lockwood Legacy, Juliette is a merging of their creative energies. Pauletti, an Easterner of Italian descent, is an accomplished musician with an eye for art and design. Williamson, a Texan from a long line of hardheaded Scots, knows the world of the Lockwoods like the back of her hand.“We decided to write under a pen name because neither one of us by ourselves could have created Kate, Jenny, Mandy, and their world,” says Pauletti. “Juliette is a little bit of us both. We want to be her when we grow up.”
“Patti teases me that I just don’t want to own up to writing a book with romance in it,” Williamson adds, “but that’s not true. I like the Lockwood women and the way they tackle everything life throws at them. And before we’re done, they’ll be ducking a lot. I imagine coming into the office every day and saying, ‘Okay Juliette, what’s going to happen now?’ She tells us, and we get it down on paper.”
Website | Twitter (@jharperbooks) | Goodreads
****************************************
***My Personal Review***
So far I really like this series even though I am not normally a fan of novels with cowboys and cowgirls.  But this isn't the normal western novel, it's a story about 3 alienated sisters who come back to the family ranch after their father's death and find out that in order to inherit the land they must all live together.  Kate is the one daughter who stayed with their father and worked the ranch and she loves it.  So the thought of losing what she has worked SO hard for is devastating for her and she fights to ensure her sisters stay.  The whole sibling rivalry theme runs strong through this novel as the sisters start to warm to each other and their new lifestyle.  Each sister has a different personality: Kate is strong and has a will of iron and will not back down from any challenge including the one her father gave her; Jenny is also strong-willed but she is a city girl so living on a ranch is NOT the life she had planned for herself; and Jenny is the soft-spoken one who doesn't like fighting and doesn't make waves.  Jenny is still a country girl at heart and in some ways I got the impression that she missed life on the ranch.  She may not have planned this life but she isn't fighting against it as Jenny is.  While Mandy and Jenny are struggling to adjust, Kate is struggling to find out whether her father was murdered or actually committed suicide.  She has suspects but will she and her sisters be able to figure out the mystery before they become the next victim?  Very well-written novel and the characters really come to life and are so completely different but somehow start to come together.  I am working on reading Book 2 so I can't wait to find out what happens!
***************************************
Stay tuned for my review of Book 2 in the Lockwood Legacy: Baxter's Draw 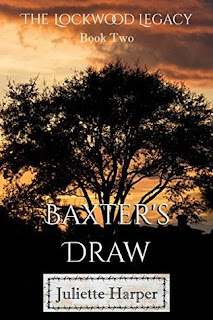 Kate, Jenny, and Mandy. The daughters who inherited Langston Lockwood’s millions and his mysteries. In this, the second book of The Lockwood Legacy, the women uncover not just the secret of Baxter’s Draw, but the secret of their father’s hidden life. Return to the Rocking L for the next part of the sisters’ journey to discover the truth about their family and to understand their own roles in The Lockwood Legacy.
Posted by Erika Marie at 11:24 PM