Dead Jed: Return of the Jed is book 3 in Scott Craven’s humorous and heartwarming series about surviving middle school, fitting in, and embracing one’s differences – even if you are a zombie. 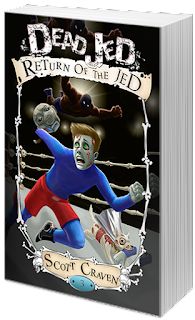 With seventh grade behind him, Jed jumps at the opportunity to spend the summer in Mexico with his dad. But there’s just one catch: Luke and Tread get to tag along.

​In Mexico, fitting in​might be easier than Jed imagined, ​with Holidays such as Dia de los Muertos (Day of the Dead)​.​ Here, a ​rising 8th grade zombie ​boy ​and his zombie dog ​won’t draw that much attention.

​But then Tread unwittingly sets off Mexico’s Chupacabra Defense Network and Jed accidentally collides with a bus​. So much for blending in. T​​he unusual pair catch the eye of a professional wrestler, who challenges ​Jed to a fight!​ ​

Their antics manage to ​capture the attention of a doctor​ who​se knowledge of the undead ​caus​es Jed to question his very existence. ​Is this the answer Jed’s been hoping for since his parents sat him down for the “you’re a zombie” talk? Jed may have finally found a way to be normal, but at what cost? 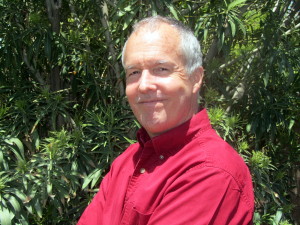 Proud graduate of Cal Poly, San Luis Obispo, have one son who will turn 18 in March 2013, now a features writer for The Arizona Republic.

What inspired you to write your first book?

I’ve been a writer all my life, and know I wanted to write a book from the time I was 18. It only took me 35 years or so. Time flies when you’re procrastinating.

How did you come up with the title?

The title was all part of the initial progression, and it all occurred in minutes. The first thought was, “What if a zombie moved in next door? What would you do?” I then considered it from the zombie’s point of view. Maybe he was a pretty decent fellow who just wanted to make friends, but that whole Hollywood view of him being a brain-eater really made it difficult. What would it take to fit in? Even worse, what if he was a kid trying to fit in during the toughest time of any student’s life, seventh grade? They’d call him names. Dead Jed. The rest was easy. “Dead Jed: Adventures of a Middle School Zombie.” I wrote the first chapter about an hour later. It was terrible.

I never set out to write an MG book, but what with the characters and the setting, it seemed natural. But I also wanted to make it count. The first two books deal a lot with bullying, and how you can overcome obstacles when you really embrace who you are and the strengths that come with it. The third book is more of an adventure where Jed learns about different people and cultures, and those differences are celebrated. But he also has to make a very important decision, one that makes him question who and what he is.

Are experiences based on someone you know, or events in your own life?

Much of the first book is autobiographical. I never lost a limb when being thrown into a trash can, but my diminutive size in middle school attracted the attention of those who felt they had to inflict pain and humiliation to feel good about themselves. They were such jerks. I never got revenge, but I did (sort of) through Jed.

I loved horror in my formative years. One of my favorites was H.P. Lovecraft, though my most vivid memory was reading “The Exorcist” in about three days, absolutely glued to my beanbag chair. And one of my biggest thrills was meeting Stephen King at a book event, where I got him to sign a first edition of “The Gunslinger.”

Name one entity that you feel supported you outside of family members.

Two people stand out. The first was Jim Hayes, my journalism mentor and advisor at Cal Poly, San Luis Obispo. He was the first one to tell me I had a future in writing as long as I worked at it. The second was my dear friend Paula, who never let me stop writing “Dead Jed” once I had started. I owed her a chapter a week. I will never forget them.

Absolutely, since I’m a journalist and have been working in newspapers for more than 35 years. The field’s been shrinking over the years, since people prefer to read about the seven things that will absolutely shock you about your parents’ sex life (and you’ll cringe at number four) rather than the latest world news. I feel very lucky to be part of such a great profession.

Do you recall how your interest in writing originated?

I do. I took a creative writing course in my sophomore year in high school. Early on, the teacher had us arrange our desks in a circle. He stood in the middle, produced an egg from his pants pocket and dropped it on the linoleum floor, spattering his shoes. He said, “Give me 250 words on what you just saw.” I gave him 500.

What was the hardest part of writing your book?

Sticking with it. I had to develop a routine so that even if I didn’t feel like writing, I wrote anyway. I also wrote to earn privileges. “If I get 1,000 words today, I’ll go out to eat.” Sounds odd, but it worked.


Do you ever experience writer's block?

Absolutely, and I came up with a trick to defeat it. I don’t plot much ahead, and I certainly don’t use an outline. But I’d try to end each chapter knowing exactly where I wanted to go, with the next chapter doing backflips in my head. That way I knew I’d have somewhere to go when I sat down again. I even looked forward to starting back up. Every now and then I’d quit without a clue of what would happen next. I just had to sit down and write through the block, and every time the book found its way.

I’ve never hated anything I’ve written, but there have been stories of which I’ve not been fond. My biggest regret is not holding onto those stories, simply losing track of them as life moved on. I’d love to go through them now, reading them with a mind that barely resembles the one that wrote them. To all you young writers, hold onto everything. Pack them away with each move, put them in a box marked. “Precious yet fragile.” You’ll ever regret it.