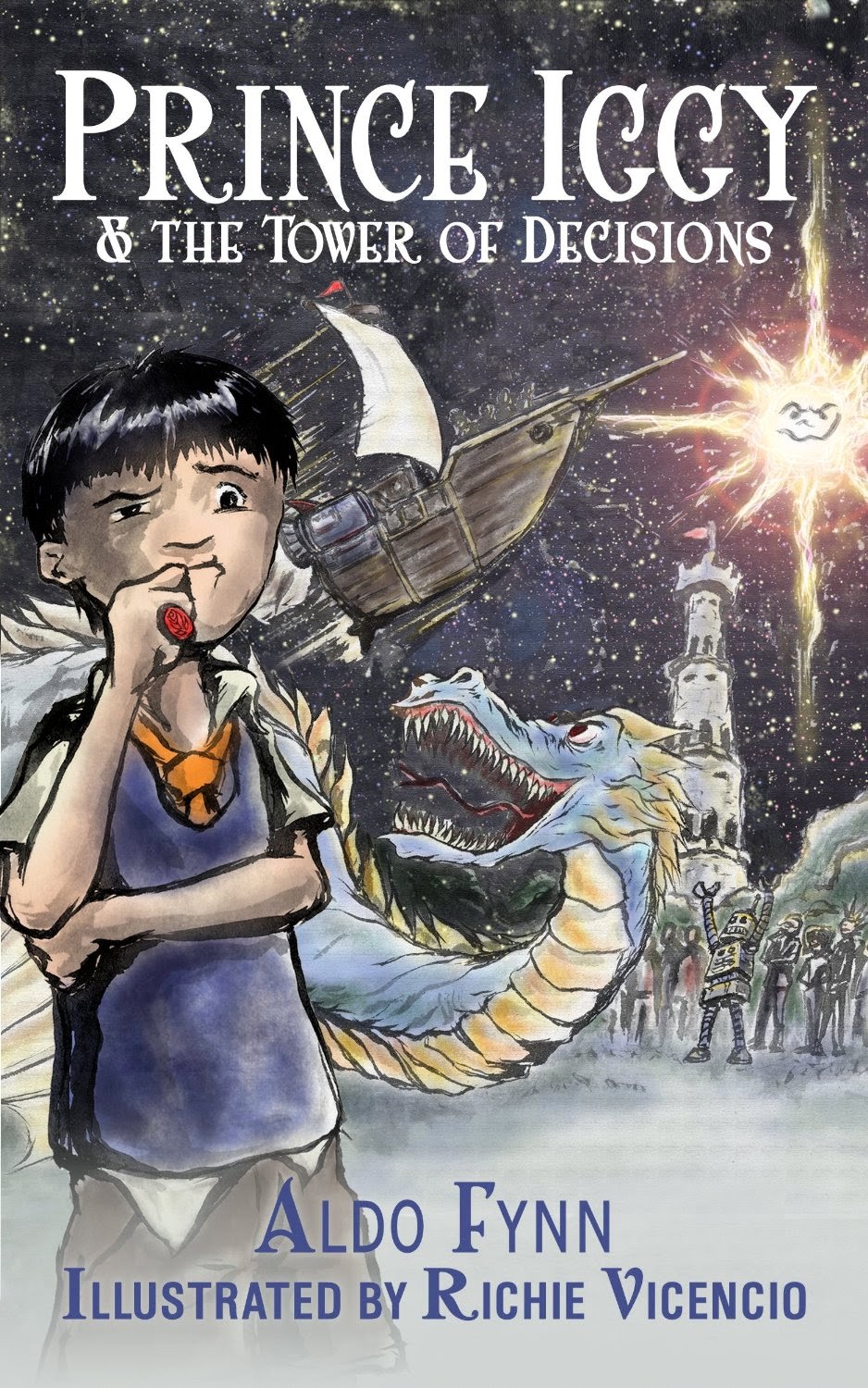 About the First Book

Title: Prince Iggy and the Kingdom of Naysayer | Author: Aldo Fynn | Illustrator: Richie Vicencio | Publication Date: November 5,2013 | Publisher: Boa Press, LLC. | Pages: 156 | Recommended Ages: 8 to 12 Summary: All Iggy Rose wants is for the kids at the Naysayer Academy to like him, and one special girl in particular. But instead, he gets teased and taunted. Every day, he eats alone in the cafeteria and gets beaten up after school on the playground. But when a cruel prank leads to Iggy's escape from the academy, a wild, unimaginable adventure begins. Why is King Naysayer offering a hefty reward for Iggy's capture? When Iggy joins forces with an eclectic cast of characters, he discovers the answer. But before he can escape from the kingdom of Naysayer, Iggy must first reclaim what is rightfully his. Does this sad, lonely boy have the courage to battle the biggest school bully, a mean headmistress, and a greedy, cruel king? Will Iggy finally believe in himself and discover his true destiny?

About the Second Book

Summary: Kirkus Reviews called the second book in the Adventures of Price Iggy, “a satisfying sequel to a memorable first book featuring an unprepossessing hero who might just become a household name.” This quirky and fast paced story with 30+ illustrations is ideal for middle grade readers and adults looking for a different kind of hero. Foreword Clarion wrote “delightful, adventurous story…Fynn uses this volume to address adolescent anxiety and self-doubt.” and IndieReader concluded Prince Iggy and the Tower of Decisions “offers excitement and surprises to keep young readers engaged.”
Iggy and his friends set sail for the Rose Kingdom. But Iggy isn’t sure if he has what it takes to really be a prince. Well, he’s about to find out…
When the Lucky Rose 2 blasts off into space, Iggy meets the Rose Star and literally has an out-of-body experience. And that’s just the beginning. His adventures include confronting a hungry shark face-to-face, dancing in a live-or-die talent competition, and battling a blue dragon with very clean teeth.
And when Iggy finally makes it to the Rose Kingdom, Queen Victoria refuses to give up the throne. If Iggy wants to become ruler of the Rose Kingdom, he must enter the Tower of Decisions. Only problem is, very few people make it out alive…

Buzz About the Second Book

“A satisfying sequel to a memorable first book featuring an unprepossessing hero who might just become a household name.” ~ Kirkus Reviews
“Like the first installment, Prince Iggy and the Kingdom of Naysayer, the titular character finds himself in a fantastical world of magic and adventure, yet he is plagued by the same troubles of other kids his age. Whereas the first book tackles issues of bullying and perseverance, Fynn uses this volume to address adolescent anxiety and self-doubt.” ~ Foreword Clarion Review
“Prince Iggy and the Tower of Decisions offers a magical adventure and some wonderful lessons for young children.” ~ Indie Reader


About the Author: Aldo Fynn

Aldo Fynn enjoys writing wacky, fantastical stories. Prince Iggy and the Kingdom of Naysayer is his debut novel. It's the first book in the Adventures of Prince Iggy Series. He's also written two wacky, laugh-out-loud picture books. He lives under his desk and promises he won't come out until Book 3 in the series is complete. Which is a shame because his desk is based in Los Angeles, where it's sunny and 70 degrees most of the year.

***My Personal Review of Prince Iggy and the Kingdom of Naysayer***

I found this book to be sad and delightful to read all at the same time.  The character of Iggy is such a sympathetic character but also never gives up, which is a good lesson for children to learn.  Iggy's character also reminded me of Dickens orphan Oliver Twist because he seems to be treated the same way at his academy that Oliver was in the orphanage :(  Iggy just wants to be normal and escapes one night.  But when he is discovered and the plot starts to heat up the action builds and the reader has to wonder if Iggy will make it on his own and get away from the bad guys?

The illustrations in this book also remind me of old time novels as they are in black and white and really set the scene for Iggy's life and what he is going through.  There seems to be no color in his life until his escape, so the black and white illustrations are amazingly accurate and they are done so well they look like they were made by a child which brings another great aspect to the book.  This book combines a great repertoire of fantasy and I thoroughly enjoyed reading it :)

***My Personal Review of Prince Iggy and the Tower of Decisions***

It is weird to hear the name Prince Iggy and that he is now the rightful heir to the Rose Kingdom.  But Iggy has finally escaped the terrible clutches of the Academy!  He is on his way to claim his place in the new Kingdom ... but wait!  There is always a twist!  Someone doesn't want him there and fights against his claim.  But now Iggy has learned a lot more and is more independent.

This book was just as much fun and action-packed as the first one.  And Iggy is again just a normal kid going through what pretty much all kids go through!  He has to learn to find his way in a world that is constantly against him in one way or another.  Good life lessons for kids even if it is set in a fantasy world :)  And of course the illustrations are just as good in this book as they were in the first one - full of life but in black and white :)  They definitely reflect the life of Iggy as for him there doesn't seem to be that "middle" area where things are normal - it is bad or good.  I can't wait to find out what happens next!