The Undertakers 5: End of the World by Ty Drago Blog Tour with Guest Post :)

The Undertakers 5: End of the Word by Ty Drago 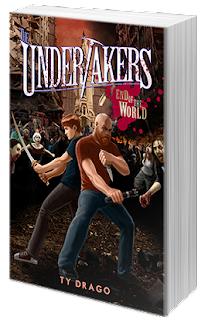 The Corpse War is over. Or at least Will Ritter thought the war was over. But Will quickly changes his mind when he is led through a doorway in time and finds himself in a future where the Earth has been all but destroyed. The Corpses, alien invaders who wear the dead like suits of clothing, have returned in horrific numbers. In the wake of their destructive onslaught, a rag-tag group of survivors with some of Will’s now grownup friends among them is all that’s left of mankind. Will must take part in a desperate, last ditch effort to rewrite history, prevent the Second Corpse War from ever happening, and defeat this evil that has consumed mankind once and for all. But victory, if such a thing is even possible, carries a heavy cost. 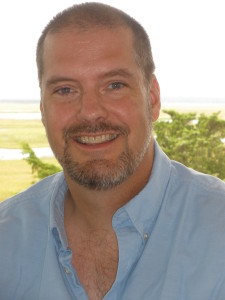 Ty Drago does his writing just across the river from Philadelphia, where the Undertakers novels take place. In addition to The Undertakers: Rise of the Corpses, The Undertakers: Queen of the Dead, and The Undertakers: Secret of the Corpse Eater, he is the author of The Franklin Affair and Phobos, as well as short stories and articles that have appeared in numerous publications, including Writer's Digest. He currently lives in southern New Jersey with his wife and best friend, the real Helene Drago née Boettcher.

For “End of the World,” and the Undertakers Series as whole, my playlist turned out to be anthems, particularly millennial anthems. I’ve played these so many times that I’ve got them memorized, a fact that I think makes my kids cringe a little.
For better or worse, here they are, in no particular order:

Music is key to writer. Well, at least my writing. Every story has its own soundtrack, and I’ve found time and time again that I need to pick the soundtrack before I put down even my first word. Truth be told, I don’t actually play these song over and over while I’m typing. Instead, I play them over and over while I’m thinking. In the car. On a walk. Whatever. It gets my juices following. It helps bring things together.

Does that make sense?

Sometimes when I try to explain this to non-writers, they scratch their heads, look cross-eyed at me, and say, “So … you’re writing a … musical?”
Um, no.
Obviously, I don’t have characters belting out these tunes. In fact, in most cases, the song don’t necessarily even apply to the storyline. I mean, this is a series about a kid army battled an invasion of “smart zombies!” What they do bring to the table, however, is a certain focus. They grease the wheels of my imagination, which is the point after all. They help me be a better storyteller.

Bottom line? Just that music and words go together like wine and cheese. They work just fine separately, but together they can be magic! 