Alexander Graham Ptuiac, the son of an inventor, wants to play for the school’s football team. During tryouts, and under the watchful eye of the team’s coach, he suddenly manifests mysterious superhuman powers. Alexander makes the team, but not before the some ill-intended adults take notice, putting his life in danger.
Alex struggles to suppress and control his strange new abilities, worried about exposing his secret and being kicked off the football team. Then he befriends Dex, a diminutive classmate who can somehow jump as high as ten feet in the air. Seems Alex isn’t the only one at school with a secret.
As the school year unfolds, Alex will find himself the target of bullies, holding hands with his first crush and discovering the shocking truth about himself and his parents. 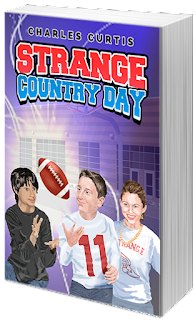 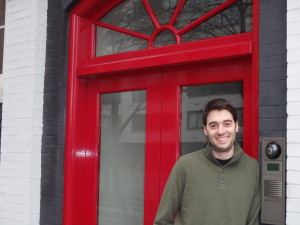 Charles Curtis is a writer and journalist based in New York City. He has reported and written for publications including NJ.com (where he is currently the site’s sports buzz reporter), The Daily, ESPN.com, ESPN the Magazine, Bleacher Report, TV Guide and Entertainment Weekly. Charles has covered the NFL, MLB, NHL, NBA, golf, tennis and NASCAR. He has also written about television, film and pop culture.

In addition, Curtis has also written, produced and was featured in videos for ESPN.com and The Daily. He has made radio appearances on stations including 92.9 The Ticket in Bangor, Maine, WLIE 540 AM in Long Island and on morning shows across Canada via the CBC.
He can be reached on Twitter: @charlescurtis82.


What inspired you to write your first book?
The tale of “Strange Country Day” began with a simple idea courtesy of my mom (both my parents are writers). She said to me, “I’ve got a book idea for you: Vampires playing football.” I rejected it immediately – “Twilight” was all the rage and I thought bloodsuckers would be out of style by the time I was published. But the image of a vampire flying up to catch a pass stuck with me – why would someone be able to fly up 10 feet in the air to catch a pass? And could other kids playing football have special powers? I used my love of comic books, young adult books and my day job as a sportswriter as inspiration and tossed out the vampires.

Is there a message in your novel that you want readers to grasp?
My characters in “SCD” grapple with the problem presented to them: They find out they have special powers that help them on the football field, but is that morally right? I hope my readers think about how that relates to today’s sports world in which performance enhancing drugs are a much-debated and discussed topic.

How much of the book is realistic?
The football and everyday struggles of middle school kids are real. But the special powers, obviously, are not. I did, however, fictionalize some concepts I heard about in an interview I did for ESPN The Magazine with futurist and inventor Ray Kurzweil, who spoke to me about the future of sports and legal performance enhancement.

Are there any new authors that have grasped your interest?
I am a huge fan of Ernest Cline, the writer of “Ready Player One.” I just finished his new novel, “Armada,” in about a week. He’s the kind of writer I can only hope to be – someone who combines action, adventure, romance, pop culture and science fiction into one page-turning package.

Do you see writing as a career?
I do, especially given what I do as a day job. I’m a sports writer who currently works for NJ.com, producing multiple posts a day about local New York and New Jersey pro and college teams.

Do you recall how your interest in writing originated?
My parents are both writers and I always felt the pull to be creative. I recently went through an old box from my childhood and found a pile of “books” I wrote and illustrated. Some of them even had “about the author” copy and “other works by Charles Curtis” in the back! I also spent high school doodling characters in my margins and daydreaming stories, so writing is in my blood.

What were the challenges (research, literary, psychological, and logistical) in bringing it to life?
Normally, you hear about writers knowing the story and not the ending. I had the opposite challenge: I knew how the book ended and wrote the final chapter first. So I had the pleasant problem of filling in the plot backwards. How the heck would I get my characters get to that final point?