For love that is tested in the crucible of fate must burn, or die... 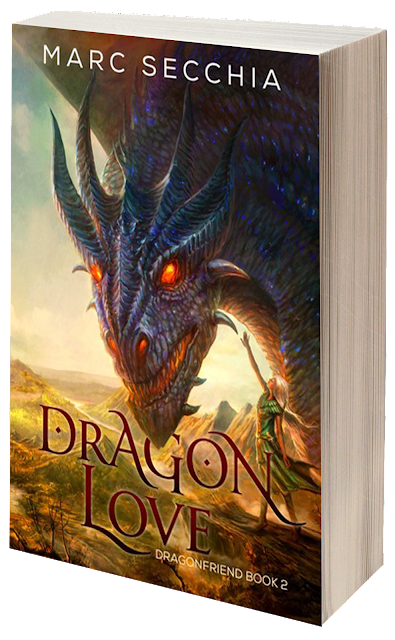 When a woman loves a Dragon, that love will change the world.

Six years have passed since Hualiama and Grandion defied the Island-World’s most sacred law. They burned the heavens together as Rider and Dragon. For his crime, Grandion the Tourmaline Dragon suffered exile and imprisonment. The Dragons forced Hualiama to forget her past.

Now, the suns must set upon the age of the Ancient Dragons. Amaryllion Fireborn, last of his kind, bequeaths Hualiama an astonishing legacy. She is the Dragonfriend. Raised by Dragons. Burned by Dragon fire. Oath-bound to a Dragon. Crossing the Island-World in search of her Dragonlove, she will forge an indelible mark upon history.

As war between Dragons and Humans engulfs the Islands, Hualiama must unravel the secrets of her tragic past in order to confront an evil that threatens the very existence of the Dragonkind. For love that is tested in the crucible of fate must burn, or die.

Marc is a South African-born author who lives and works in Ethiopia with his wife and 4 children, 2 dogs, a rabbit, and a variable number of marabou storks that roost on the acacia trees out back. On a good night there are also hyenas patrolling the back fence.

When he's not writing about Africa Marc can be found travelling to remote locations. He thinks there's nothing better than standing on a mountaintop wondering what lies over the next horizon.

*********************
***EXCERPT***
Dragon-thunder shook the palace.
Hualiama kicked off her soft slippers. Picking up her formal lace skirts, she began to run, but the long train snagged immediately on the curved claws of a stylised jade Dragon. Dagger in hand, she hacked wildly at the priceless fabric restricting her stride. Bleeding–Dragon fire take it! She stumbled up endless stairs designed by an architect enamoured with galleries sized to house ridiculous mountains of royal artefacts. Entering a long corridor, her woefully short legs stretched into a sprint. Ranks of larger-than-life paintings of tall, pointy-eared ancestors blurred to either side. All of her attention was focussed on the altercation on the Receiving Balcony, atop Fra’anior’s Royal Palace.
A Dragon’s voice boomed, “This means war, King Chalcion!”
She had to stop them. Now.
Slewing around a corner, Lia deliberately cannoned off a man-high ornamental vase. She caught her balance, agile as any dragonet, and picked up her knees. Head down, she pumped her arms, accelerating to the speed of a warrior and dancer who trained for five hours daily. Twisting between two thickset marble columns to shortcut her route, Lia used a stone pot-plant as a springboard to leap upward at full stretch, flying briefly over a yawning drop to the palace gardens below. Snagging the crenulations atop the wall with her fingertips, she wriggled upward with the facility of a lizard scaling a wall and vaulted smoothly onto the balcony beyond. One more level.
She heard querulous voices, and the swish of Dragons’ wings. They were leaving.
Her heart could not sink, because it was thrashing about in her throat. But it should. This was just the incident to ignite the simmering relations between Dragons and Humans. She should know. That very morning, Lia had witnessed a Dragonwing immolating a Human village.
Bounding up the final staircase, she raced out onto the balcony, screaming, “Stop!”
Lia caught her foot in the wreck of her dress, slipped, and skidded across the rough flagstones all the way to the edge of her father’s robes.
“Stop them!”
Stooping, the King seized her arm. “This is an outrage, Hualiama! How dare you barge–”
She tore herself free, hurled herself to the balcony’s edge, and screamed again, “Stop! By the Spirits of the Ancient Dragons, please!”
Hualiama gazed out over her beloved Island. Sweet, haunting harmonies of birdsong and dragonet-song saluted the gathering evening, the ever-song, some called it, the unique melody of Fra’anior, which was an Island-Cluster of twenty-seven Islands precariously perched on the rim-wall of the greatest volcano in the Island-World. The late afternoon light streamed in so thick and golden, she feared the King might pass a law to store it in the royal treasury. But she had eyes only for the Dragons.
Four Dragons winged over the vast bowl of Fra’anior’s volcanic caldera, their scales gleaming like glorious jewels in the resplendent light. Two were hundred-foot Reds, as perfect as matched rubies, called Zulior and Qualiana, and the third a vast emerald-green named Andarraz. Sapphurion, the Dragon Elder himself, led their Dragonwing. His scales evoked the turquoise hue of a clear lake. All were breathtaking, but Sapphurion was the greatest of all, the leader of the Island-World’s Dragons.
The four Dragons banked with supreme grace, angling back toward the Receiving Balcony. Hualiama’s heart stood still.