The Urban Boys: The Discovery of the Five Senses
by K.N. Smith 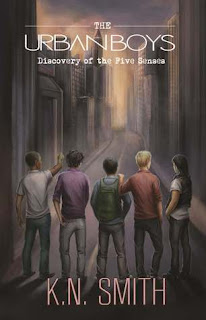 The Urban Boys is different from any book I have read before - I love the genre with superheroes and/or superpowers in normal people.  This is about a group of 5 boys - Jordan, Rhee, Kinsu, Chase and Alex - who are friends and their lives are seemingly pretty normal until some kind of energy force changes them.  The subtitle of the book is "Discovery of the 5 Senses" and that is what the boys are struggling with - they have found that they each have powers of the 5 senses and even though they are 5 very different personalities they are brought together by their powers.  And I like the way their struggles both to understand their powers and figure out how to use them parallels real life for teenagers as they struggle to find their way into adulthood and figure out what they want.  I also like the contrast between the 2 different worlds, one being very perfect and Sandry Lake, Druth and everything mysterious that becomes their new "hangout" after the event.  The contrast between dark and light parallels the struggle with the boys and their powers.

This for me was kind of like The Fantastic Four or The Avengers - where people who really have nothing to do with each other have to learn to come together in order to fight evil and even if they have their issues with each other they have to figure out a way to work together if they want to win.  I think that most young adults especially teen boys would enjoy this and I enjoyed it as an adult as well - although one thing I struggled with was attempting to understand the event that changed them.  I need to re-read the book and see if that helps.  But I definitely recommend it as a good read!