Today Month9Books is revealing the cover and some excerpts for their Charity Anthology IN THE BEGINNING! Which releases October 25, 2016! Check out the gorgeous cover and enter to be one of the first readers to receive an eGalley!!

On to the reveal! 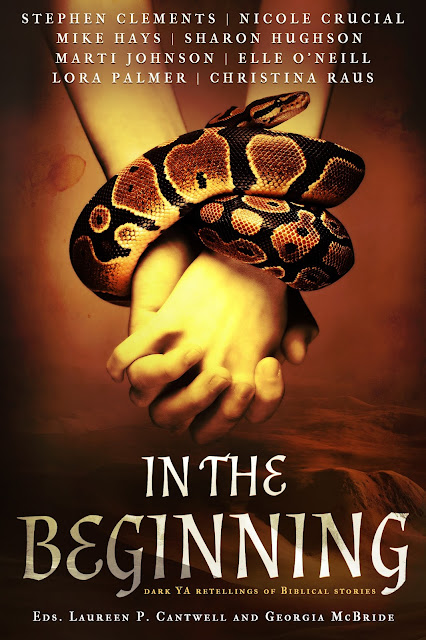 In the Beginning (Oct. 25, 2016) –Eight authors come together to build a powerful collection of dark young adult short stories inspired by the mysteries, faith, and darkness found within the Bible. Old Testament and New Testament, iconic and obscure figures alike are illuminated, explored, and re-envisioned throughout this charity anthology from Month9Books.

IN THE BEGINNING, edited by Laureen Cantwell and Georgia McBride

Daniel and the Dragon by Stephen Clements
A troubled orphan named Habakkuk dutifully follows his master, the prophet Daniel, into temples of blood-thirsty demon-gods, battles with unspeakable horrors, and bears witnesses to mind-breaking evil until his master's zealous defiance of the king's law seals their fate.

Babylon by Nicole Crucial
Far above the earth, in Second Eden, where moments and eternities all blur together, young Babylon befriends Sefer, the Book of Life. As Babylon awaits the moment she'll fulfill her destiny, she and Sefer try to understand the world in which they live.

Last Will and Testament by Mike Hays
A homeless young boy, Baz, bears the weight of humanity on his shoulders and upon his body. When dark forces test a new-found friendship, Baz’s willingness to bear the ugliness of their world will be shaken.

The Demon Was Me by Sharon Hughson
Based on the story of the demon-possessed boy healed by Jesus, this tale provides a glimpse into a post-apocalyptic world where a teenage boy seeks to journey to a better land and yearns to discover the kind of man he's meant to be, only to be hijacked by an evil spirit intent upon chipping away at the hope, faith, and resilience of its host.

The Deluge by Marti Johnson
A non-believer shares the story of Noah’s ark-building and the deadly downpour that follows. Fear, faithlessness, and the fallibility of mankind collide in a community where second chances aren’t unlimited and a better-late-than-never attitude just might be your doom.

Condemned by Elle O'Neill
Just sixteen-years-old, Barabbas finds himself pulled out of Routlege Academy and into a reality show competition—against Jesus himself—where the reward for the winner is life.

First Wife by Lora Palmer
In a first-person retelling of the saga of Jacob, Rachel and Leah, themes of family, deception, guilt, and heartache emerge amidst the first days of Leah’s marriage to Jacob—a marriage mired in trickery a mere week before Jacob was to marry Leah's sister Rachel.

Emmaculate by Christina Raus
Based on the story of Mary's Immaculate Conception, we enter the troubled mind of Emma, who finds herself torn between her religious upbringing and the purity ring that binds her to her boyfriend and the pregnancy that results from her relationship with another boy.

From THE DEMON WAS ME, by Sharon Hughson:

The ghastly black fog overtook me. Icicles pierced my back. Every muscle in my body spasmed. I plunged face-first against the ground. Something sharp gouged my cheek. Shivery tingles pervaded my insides. A vile presence pressed against my mind.
“Get out!” I rolled to my back, arms outstretched. I wanted to fight, throw the intruder off me. But how can you resist something as ethereal as air?
Laughter rang in my ears. Sinister. It shuddered against my soul. Terror and hopelessness collided in my chest. A foreign power clutched at my mind.
I screamed. I rolled to my side and squeezed my eyes shut. If only I could disappear.
Another dark wave of laughter echoed through my skull. Convulsions gripped me.
Against my will, my limbs flailed in every direction. A spike pressed into my mind. I cradled my throbbing head. My body, a tumbleweed in the wind, spun on the ground.

From BABYLON, by Nicole Crucial:

Only those will enter Heaven whose names are written in the Lamb’s Book of Life.

These were the first words I heard, in the beginning of time.

But Sefer, the protest comes, Revelation wasn’t written until the first century.

My answer is that time is a funny little plaything to God, or so I imagine. That first sentence was the wind that breathed life into my chest, the binding of my pages, the ink in my soul. It knitted together my stardust-atoms from across centuries and millennia and planes of existence.

And when the first dregs of consciousness swirled at the pit-bottom of my spine, I yawned and opened my eyes to paradise.

From CONDEMNED, by Elle O’Neill:

To his surprise, as he heard the metal door grind to a stop, there was a popping sound, like the flash-lamp did when they experimented in Classic Photography at Routlege. Except no camera appeared—not that he could see anyway—but rather a digital time clock, bold red numbers, already beginning their descent, in striking relief against the black paint covering the walls.

Of course they would include the fractions of a second, he thought. He was now fighting a tiger against a racing clock. For all that they were merely numbers, he saw their dwindling trickle as if he were watching grains of sand pour through the hourglass of his fingers, helpless.

The tiger looked at him. It didn't glance his way. It directed its massive head at him, its eyes trained on Barabbas ... and they didn't turn away.

Another man, in another arena, stood calmly while the tiger advanced. His breathing was even, he did not watch the clock, and he looked with love upon the prowling beast. When it snarled, he slowly exhaled; when its whiskers glanced his weaponless fingers, he blinked gently as the hot breath of the tiger dampened his skin.

From LAST WILL & TESTAMENT, by Mike Hays:

I’ve found money, I’ve found food, and I’ve found myself in plenty of trouble on plenty of occasions, but I’ve never found another human being just lying around. That’s what happened when I found a person-shaped ball of olive drab and camouflage clothing—which would have been more at home in the reject pile down at the army surplus store—under our decrepit, worn sign for the, “Extraordinary

It’s true. I found a boy about my age sleeping at the end of the Extraordinary League of Witch Assassins driveway.

From UNWANTED, by Lora Palmer:

I swallow down the fear this moment brings, the anxiety that once he does see me, he will no longer accept me. No, I must stop thinking this way. My husband is not like Jacob, dazzled by the superficial beauty of my sister. My husband, my love, will see me.

Taking courage from this, I let out a shaky laugh as he helps me stand. I long to see him, too.

He lifts my veil, his deft fingers moving slow, relishing the anticipation of this moment. At last, he lifts the linen over my face and lets it slip to the floor behind me. We stare at each other, stock still, in stunned silence.

From EMMACULATE, by Christina Raus:

The Ten Commandments are pretty straightforward. Killing? Bad. Lying? Nope. Adultery? Don’t even think about it. But is real life really that straightforward? If you tell your boyfriend that you’re going golfing, when really you’re going out to cheat on him, is the lying or the adultery worse? What if you stab the guy you’re having an affair with? Isn’t being a murderer worse than being a cheater? I think the stabbing is worse than the lying and the cheating combined. So, it was kind of unfair for God to group killing, lying, and cheating all together under one umbrella. They all seemed really different.

I was an adulterer. I couldn’t deny that. I was also a liar. A very, very good liar. But I wasn’t a murderer.

From THE DELUGE, by Marti Johnson:

The stench of mildew and mold is heavy in our nostrils, and my lungs feel as though they are on fire. My breathing is audible in the lulls between the thunderclaps. My mother huddles, shivering, propped between two rocks. She is coughing painfully, and I can hear her teeth chattering.

It is hard to breathe because the air itself is full of water.

A deeper shadow has fallen across the side of the mountain on which we are sheltering. I pull aside the brambles, and gasp in amazement when I realize what it is. “Look!” I call to the others, and point at the sight. The ark has risen with the water, and now bobs up and down. It sits high in the water. We hear nothing from it but the creaking of the wood timbers and the sound of the branches and rocks on the hillside scraping against its hull.

From DANIEL AND THE DRAGON, by Stephen Clements:

Your god is a liar!” roared the wizened man in thin black robes, as he pounded his breast with his fist.
Habakkuk stood by the gates of the temple as his master picked a fight with a sanctuary full of the slavish followers of Bel, a bloodthirsty demon god. A fire raged in the fanged maw of a giant, stone head sunken into the back of the temple, there to receive the offerings rendered unto Bel. He had seen this before in other temple raids with his master, though not on such a massive scale, and not at the heart of the demon cult in Babylon itself. The fire raged as the greatest offering that the Babylonians—who adored Bel above all other gods—could sacrifice to their deity was their own newborn children, rolled their screaming, helpless bodies down a stone, handshaped altar into the fire. They offered the fruit of their wombs to their dark god, who devoured the innocent souls sacrificed to him in eldritch rituals.

3 winners will receive an eGalley of IN THE BEGINNING, International.

a Rafflecopter giveaway
Posted by Erika Marie at 9:29 PM