ABOUT LAST SIEGE OF HAVEN
(THE UNDERTAKERS #4) 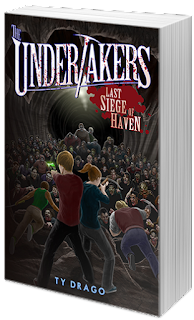 While away on an undercover mission, Undertaker Will Ritter has made an unthinkable alliance...with a Corpse! But though Robert Dillin (aka 'The Zombie Prince') is indeed one of those alien invaders who animate and possess the bodies of the dead -- unlike the rest of his kind, Dillin isn't evil. In fact, he wants to help. And Will needs that help, because the Queen of the Dead has learned the location of Haven, the Undertakers' secret HQ, and is planning a massive and deadly assault.


With the last day of the Corpse War finally upon them, Will and his friends find themselves in a desperate race to close the Rift between worlds and forever kill the Corpses. But can they do before Haven is overrun?


For that matter, can they do it at all? 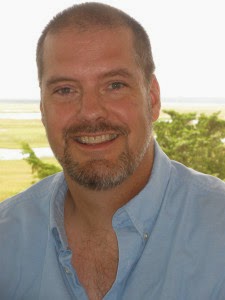 Ty Drago does his writing just across the river from Philadelphia, where the Undertakers novels take place.  In addition to The Undertakers: Rise of the Corpses,The Undertakers: Queen of the Dead, and The Undertakers: Secret of the Corpse Eater, he is the author of The Franklin Affair and Phobos, as well as short stories and articles that have appeared in numerous publications, including Writer’s Digest.  He currently lives in southern New Jersey with his wife and best friend, the real Helene Drago née Boettcher.


Do you have a specific writing style?


It took me a long time to find the right voice for The Undertakers.  The novels are told first-person by a pre-teen boy – and it’s been a long time since I was that age.  The world then and the world now are very different.  When I was twelve there was no internet, no video games, and if you missed your favorite TV show, you had something called a “summer rerun,” but otherwise you were out of luck.  In my day, a telephone was an appliance that was big and heavy and had a dial instead of buttons.  It was hardwired to your wall and had so much bulk that you could literally clunk a burglar over the head with it.  In fact, in more than a few “Perry Mason” episodes (look it up!) the murder weapon was a bludgeoning telephone!


So I guess it’s no surprise that I struggled to connect with my characters.


Fortunately, my son Andy came to the rescue.  After telling me, not unkindly, that my first draft completely missed the mark, he became my teacher, my guide through the world of modern childhood.  He explained to me how kids today think, act, and talk to one another – how they view the world and how the world views them.  Frankly, the series never would have happened without him, which is why the first book in the series, Rise of the Corpses, is dedicated to him.


Basically, Will Ritter, the hero of The Undertakers, uses a variation of what used to be called “Dear Reader.” He tells his story as if he’s speaking directly to the reader, drawing him or her into the adventure.  My goal is to make each one of my readers feel almost as if they’re standing right beside Will as he battles the Corpses.  It’s a style that’s worked well for me, so much so that I’ve started applying it to other projects.


How much of the book is realistic?


Considering I write a series about aliens invading the Earth by possessing and animating the bodies of the recently dead, I try to be as realistic as possible.  The novels are set mostly in and around Philadelphia, a city that I know quite well.  I use actual locations in each book and visit those places – taking photos and, when appropriate, interviewing people – so that I can write my story with as much of an authentic flavor as possible.


I also try to make my Corpses as realistically gruesome as possible. I’ve researched human decomposition, and have turned that research into the “Type 1 through 5” system that the Undertakers use to rate the degree of rot that has gripped a particular Corpse.  Type 5s are literally falling apart.  Type 1s are fresh and strong.


Do you have to travel much concerning your book(s)?


I’m a big believer in self-promotion.  I’m also an extrovert and a reasonably good public speaker.  In addition to the usual events such as bookstore and libraries, I visit a lot of middle schools.  To date, I’ve been to more than sixty of them in six states, and have spoken about writing, done signings, and run writing workshops for more than 25,000 kids.  I enjoy these events and routinely do dozens of them every year.


My wife and I sometimes take road trips, traveling through states all up and down the eastern seaboard of the U.S., doing school visits as far north as Maine and as far south as Kentucky.  In coming years, I’m hoping to expand my travel further south and west.


Middle schools are the best audiences any writer could ask for.  They’re enthusiastic and inquisitive, and often ask surprisingly astute and probing questions!  I love it!

Do you have any advice for other writers?


I get this question a lot.


I have five rules for successful writing.  These aren’t entirely my own, but are taken partly from the teachings of the great Robert Heinlein.  But while he had six rules (one of which I’ve never agreed with), I only have five:


Rule 2: Finish what you write (This is a big stumbling block for most newbie writers.)


Rule 3: Edit what you write (Here’s where Mr. Heinlein and I differ. He didn’t believe in “tinkering” with a story too much.  But 80% of what I do is editing.  No manuscript leaves my house until it’s been through at least six revisions.


Rule 4: Submit what your write (Get your work out there and keep it out there. If it’s rejected, submit it somewhere else.)


Rule 5: Go write something else.  (Never stop writing.  Always have a project in the works!)


Do you have anything specific that you want to say to your readers?


Those of you who’ve read and enjoyed the adventures of Will Ritter and the Undertakers: Thank you!  Your emails and reviews have blown me away.  I’m so grateful I’ve been able to tell this story and have so many people enjoy and appreciate it.  It’s been a great ride!


Giveaway Information:  Winner will be drawn June 26, 2015
· Five (5) winners will receive a digital copy of Last Siege of Haven (The Undertakers #4) by Ty Drago (INT)