Hannah Both Ways by Rosie Greenway Blog Tour with Giveaway :) 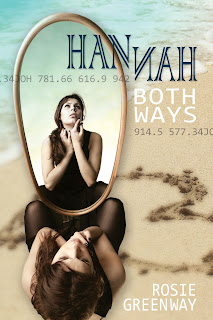 A devastating Twitter prank yanks Hannah out of the popular crowd and turns her into the high school’s best bad joke. Determined to finish the year and graduate, Hannah must keep the humiliating details from her impulsive mother—who just might pack up their belongings and move. Again.

Hannah hovers below the radar by submersing herself in a new routine. Post-it notes, Dewey Decimal numbers and carefully planned trips to the library are her refuge. That is, until a persistent new student invades her space. Lucas has complete disregard for Hannah’s cynicism and snark, and he seems to know the bullies who targeted her. Can Hannah trust him, or is he part of another ploy to torment her?

When Mom staggers down the stairs, I’m on the couch with my laptop perched on my knees, editing my portfolio. She holds her head and moves her mouth around like she’s swallowed something disgusting. Her eyes flicker to the front hall and then over to me.
“If you’re looking for your little friend, he’s gone.” My eyes stay glued to the screen.
“Don’t patronize, Hannah. It’s not cool.”
Is she freaking kidding? I abandon my laptop and follow her into the kitchen. She fills the kettle and plugs it in. Then she looks out the window, rubbing her neck and tilting her head from side to side.
“You know what’s not cool, Mom? Lying in bed all night wondering if the guy you’ve brought home might wander down the hall to pay me a visit because you’re too drunk to entertain him yourself, that’s what’s not cool.”
She gapes at me, her eyes open wide. Now I know where I get my confused fish look. The apple really doesn’t fall far from the tree.
I return to the living room and plonk back down on the couch. She follows, stopping behind the armchair and curling her fingers around the chair back.
“Did something happen to you last night?”

About The Author:
Rosie Greenway grew up on the outskirts of Toronto, and continues to live and work in the GTA with her husband and family. After spending her formative years public-school hopping, Rosie attended the University of Toronto, specializing in English literature. A former English teacher, Rosie now finds herself putting into practice the many lessons she used to impart to the students in her class room. While she has often turned to writing as a way to relax and unwind, Hannah Both Ways is her first foray into the world of Young Adult publishing.
When she isn’t writing, Rosie is an avid traveler, armchair film critic, enthusiastic foodie and voracious reader. She is a passionate literacy advocate and one of her greatest achievements is instilling in her daughter the joy of reading.