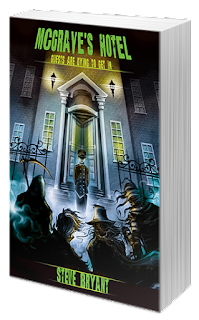 It’s 1936, and nearly twelve-year-old JAMES ELLIOTT is a bellhop at McGrave’s Hotel, there a year since the night his parents died while on a spy mission into Nazi Germany.

JAMES craves a goodbye message from his parents, but is distracted by troublesome guests who require his help.

Assistance with locating a missing and priceless mummy, wrangling mutant spiders, and attaching the head of a bridegroom is just the kind of hospitality guests have come to expect while at McGrave’s hotel where guests are dying to check in.

But over the course of one frightful evening, James will team with Death’s daughter to fight Nazi sympathizers, monsters, and the undead in this riveting, deathly, historical adventure story unlike any you’ve read before. 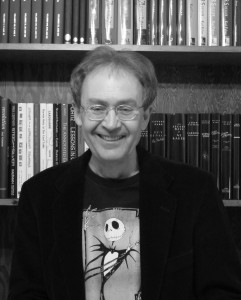 Steve Bryant is a new novelist, but a veteran author of books of card tricks. He founded a
monthly internet magazine for magicians containing news, reviews, magic tricks, humor, and fiction, and he frequently contributes biographical cover articles to the country’s two leading magic journals. He lives in Bloomington, Indiana.

The Graveyard Book. (Neil Gaiman) A masterful takeoff on The Jungle Book in which a little boy is raised by ghosts in a cemetery. I so wish I had had this idea first and had tried to write it. No contest with Mr. Gaiman here, but it would have been fun. Best of the bunch.

From the Dust Returned. (Ray Bradbury) The novel that grew from Bradbury’s short story “Homecoming.” Sort of The Addams Family meets Ray Bradbury.

The October Country. (Ray Bradbury) The collection of short stories that contains “Homecoming,” “Uncle Einar,” and others.

Miss Peregrine’s Home for Peculiar Children. (Ransom Riggs) And its sequels, Hollow City and Library of Souls. I enjoyed the third book best.

The Hothouse by the East River. (Muriel Spark) That it is on this list is a bit of a spoiler. Something spooky is going on in this book.

The Gashlycrumb Tinies. (Edward Gorey) The book-length poem re the deaths of 26 children, alphabetically.

“Little Orphant Annie.” (James Whitcomb Riley) True, it’s only a poem, but a huge part of my spooky literary upbringing. My mom used to scare the heck out of me with her rendition.