The Art of Rebellion by Brenda Joyce Leahy Blog Tour with Review and Giveaway :) 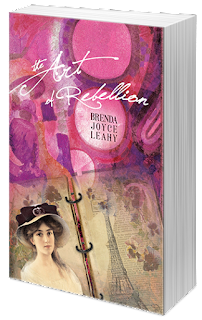 Art is Gabrielle's passion, but her parents have other plans for her future-marriage to a man three times her age who holds nothing but disdain for art. Gabrielle is determined to escape life as the baron's trophy wife and the confinement of traditional roles. She flees her privileged home in the French countryside for Paris and the grandmother who understands her passion. When she cannot locate her grandmother, Gabrielle is left on her own in the City of Lights. The art world of Paris, 1900, brims with excitement, opportunity, and risk. Should Gabrielle trust her new friends, or will they take advantage of her hopes and dreams?

For those who love the Victorian style of writing and a tiny bit of Steampunk thrown in the mix then this book is for you.  Gabrielle has travelled to Paris to find her grandmother after running away from everything she has known - going from her small country life straight into the bustling city.  She meets some new and intriguing people along the way including the scheming Babette, who offers to help her in exchange for taking all her money, leaving Gabrielle with next to nothing in a city she doesn't know.  Gabrielle cannot find her grandmother, she seems to have just disappeared into thin air.  So her hunt continues as she meets more new people on the way - but always questioning their motives as well.  I think Paris is a great setting for this novel because it is set during a time of passion and coming-of-age for art in one of the most beautiful cities in the world.  It's mysterious and beautiful but with a neverending current of danger.

The characters of Babette, Henri and Alphonse seem very simple on the surface but the more you read the more you realize how complex they really are.  Babette especially being an artist like Gabrielle but yet is intense and always looking for a good time.  Even though I want to hate her it's hard because I feel like deep down she really does care for people.  And then there is Philippe, the handsome dashing stranger that piques Gabrielle's attention immediately upon meeting him.  He seems to be amazing but is he really?  Or is he going to turn out to be a villain?

Throughout the novel Gabrielle encounters a lot of problems in her search for not only her grandmother but also herself - but her ties to the artistic world are always there bubbling in the back of her mind.  Her dreams of visiting the Louvre come true and so much more.  I really enjoyed reading this, I think it's a great novel and definitely recommend it :) 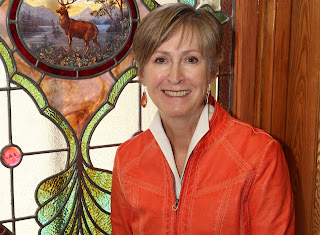 Brenda Joyce Leahy has travelled to France five times but finds there’s always more
explorations awaiting her. She loves historical fiction and thinks she was born a century too late but can’t imagine her life without computers or cell phones. So, perhaps, she arrived in the world at just the right moment to tell this story.

She grew up on a farm near Taber, Alberta but now lives with her family near the Rocky Mountains in Calgary, Alberta. After over 20 years practising law, she has returned to her first love of writing fiction. She is a member of several writing organizations, including the Society of Children’s Book Writers and Illustrators (SCBWI): her profile there is http://www.scbwi.org/members-public/brenda-johnson-2. The Art of Rebellion is also profiled on the Humber School of Writers’ website at http://creativearts.humber.ca/programs/school-writers/published-books. Brenda is also a member of the Historical Novel Society: http://www.historicalnovelsociety.org, and leads a YA/MG writers’ critique group in Calgary.

The Art of Rebellion is her first Young Adult novel, published by Rebelight Publishing, spring 2016.