The Legend of the Pumpkin Thief by Charles Day Blog Tour with Personal Review and Giveaway :) 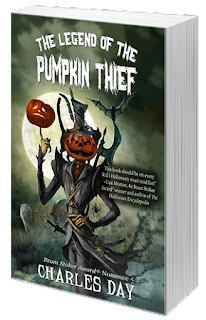 As the townsfolk sleep, something creeps into the neighborhood. Hidden in shadows, its presence is as old as time itself, its intent not born of goodness.

Nick, a teenager who fancies himself a detective, wakes to find his carved masterpiece missing. Now a mystery is afoot, and Nick has his first assignment, to find out who or what is snatching up the town’s pumpkins and why.

Unfortunately, as with all great detectives, obstacles stand in Nick’s way—the neighborhood bully and his cronies, and the strange old lady and her dog who share the run-down house at the end of Nick’s block. As Nick investigates, an urban legend unravels . . . .

The Legend of The Pumpkin Thief.

Nick fears the legend as he embarks on the most dangerous adventure of his young life. Collecting clues, getting ever closer to the true nature of evil, he learns that curiosity comes with a high price.

I enjoyed reading this book - it's perfect for young adults because while it's about Halloween and has some scary themes, it's not violent and it's not horror.  Nick is a normal kid with the exception that he loves to investigate things.  He is kind of a young Sherlock Holmes.  And when all of the town pumpkins start disappearing Nick decides he must figure out who is doing it.  There is a legend of the Pumpkin Thief and when Nick discovers it he can't believe that could be true ... but what else can account for the missing pumpkins?  There is an old lady that is not a fan of the kids or anyone being on her property and she will send out her dog to get them anytime.  In between investigating Nick is also dealing with real-life problems like a bully who won't leave him alone and keeps threatening him, making Nick a little scared to walk around alone.  But he continues working on the case and eventually he and his friends discover the truth behind what is happening and solve the case.  It's really a great read for all ages, I enjoyed it at 40 years of age :)  The characters are well-written and you can really engage with their personalities and circumstances.  And of course the bullying theme and resolving conflict is a strong theme in the book. 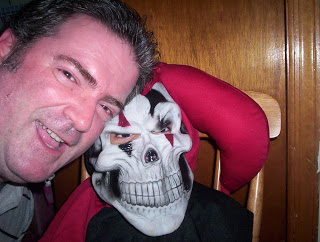 He is also the Bram Stoker Award® nominated author of the YA novel, THE LEGEND OF THE PUMPKIN THIEF. He’s also published his first adult novel DEEP WITHIN and the first book in his Adventures of Kyle McGerrt trilogy, a YA western heroic fantasy, THE HUNT FOR THE GHOULISH BARTENDER, and his first co authored novel with Mark Taylor, REDEMPTION

His forthcoming publications and projects in development for 2014 include a comic book series
based on the ADVENTURES OF KYLE McGERRT trilogy, his first middle grade series, THE
UNDERDWELLERS, and his third YA novel, IMMORTAL FAMILY.

On the publishing business side of things, Charles is the owner of Day Media and Publishing in New York, which houses the successful imprints, Evil Jester Press, Evil Jester Comics, and Hidden Thoughts Press (mental wellness collections,)

He’s also an artist and illustrator, who is passionate about creating the many characters he’s brought to life in his published, or soon to be published works. You can find out more about his upcoming writing projects, check out his illustrations and art, or find out what he’s cooking up next with that evil dude in the box, the evil Jester, by visiting his Facebook page:https://www.facebook.com/charles.day.92