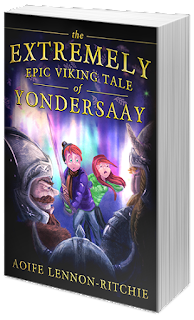 This winter, siblings Ruairi and Dani Miller visit their ancestral homeland: the legendary Viking island of Yondersaay. Even with Granny Miller's storytelling to pass the time, the pair manage to find trouble. In less than twenty-four hours of their arrival, Ruairi is mistaken for the lost Boy King of Denmark, kidnapped by Vikings, and scheduled to be sacrificed at sundown. Granny isn’t very pleased.

But when everyone except them goes Viking, the three turn to Granny’s epic tales of the legends of Yondersaay, The Gifts of Odin, and King Dudo the Mightily Impressive for clues. But not all stories end happily, and Ruari, Dani, and Granny will have to write their own happy ending.

This excerpt from The Extremely Epic Viking Legend of Yondersaay will give you an idea about what to expect when you pick up the book. Hamish Sinclair is a baddie, a Viking who wants to capture and sacrifice eleven year old Ruairi Miller before sunset on Christmas eve. He’s also a butcher. Even baddies have day jobs.

In this section Ruairi Miller and his sister Dani come face to face with Hamish for the first time.

When Ruairi made it through the door, some incomer was asking the butcher, out of politeness, while she was waiting for her ham to be sliced and wrapped, why he’d decided to become a butcher. He let out a sigh, crossed his arms, and rolled his eyes at her. The colored bits went so far up in his head that Ruairi thought they would get stuck up there and then what would he do.
“I’m Hamish Sinclair, and the Sinclairs are the butchers like the Andersons are the teachers and the MacFadyens are the whiskey-makers,” he boomed at her. “Because if I wasn’t a butcher, then there would be no such thing as a Sunday roast or a midsummer barbecue or a chicken sandwich. On Sundays, there’d be carrots and potatoes and parsnips and a big gap in the middle of the table. It would be confusing. People would still be hungry after Sunday lunch, and they wouldn’t know why.
“And what would be done with all the extra animals, I ask you? The island would be positively chock-a-block with over-woolly sheep and geriatric cows. Not to mention the ferocious smell of poo. People wouldn’t be able to walk for poo. There’d be poo everywhere. And you’re mad if you think I’m going to spend my days going around cleaning up cow poo and herding pigs and chickens off the High Street so people can walk down it.”
When his eyes did flicker over Ruairi and Dani, they gasped. Hamish seemed utterly indifferent to them, and despite themselves, Dani and Ruairi found themselves inching forward so they could look more closely at him.
“That’s the man from the River Gargle whirlpool,” Dani whispered to Ruairi without moving her lips.
“Definitely. He’s even bigger in real life.”
“He was in real life last night,” Dani said.
“I mean up close. He’s even more massive up close. What is he? Half-giant, half-gorilla?”
“Or one quarter mountain, three quarters abominable snowman?”
Eventually they stopped whispering and just stood there, trying very hard not to stare at Hamish Sinclair.
Hamish Sinclair was poured into white wellies and a white butcher’s coat that looked like a sausage skin on him. If you pronged him with a fork, he might explode. He wore a white hairnet under a baseball cap. There was a chance he wasn’t pleased about the hairnet, it wasn’t the most manly-looking accessory; Ruairi imagined a great deal of effort had gone into disguising it and tucking the edges under the cap.
The butcher’s shoulders were wider than the entire meat counter. His head skimmed the shop ceiling. And to say he was hairy was an understatement; his forearms needed hairnets.
The thing that made Hamish not just big but scarily big was not his height or his width or his hugely muscular arms and thighs. What made the difference was his voice—so deep, so booming, and so loud that even if he were tiny it would give the impression of a giant speaking. He wasn’t smiling, and he wasn’t talking cheerfully about the weather, like everyone else they’d met on the island.
Mum and Granny ordered a turkey and a ham for Christmas dinner and sausages and bacon and black and white pudding for tea. They ordered venison for venison stew and sliced meats for sandwiches. They talked about getting a turducken—a chicken inside a duck inside a turkey—for Christmas dinner instead of a turkey and a ham but decided against it in the end.
“Raising chickens inside ducks inside turkeys could be cruel if not carried out in a closely monitored and regulated environment,” Mum ventured. “A chicken couldn’t possibly have much quality of life if it grew up inside the bum of a duck. And the poor turkey with both a chicken and a duck in its bum. What if the chicken and the duck didn’t get on and started pecking? It doesn’t bear thinking about.”
“Is it organic?” Granny wanted to know.
“Free-range,” Hamish grunted.
“All the same, best not,” Granny said. “Maybe next year.”
“I’ll have your order run over to Gargle View Cottage later this afternoon, Granny Miller,” Hamish said. He did not ask for Granny’s name because he already knew it. He did not ask for Granny’s address because he already knew that too. Ruairi was not thrilled that this particular person knew where they lived, but everybody knew everybody on Yondersaay, so of course he knew Granny’s address. Mum thanked Hamish Sinclair and wished him a Merry Christmas, and they all left the shop.
“Watch out for the mad one on your way out—she’s back from her break, out there yelling ‘No meat!’” Hamish Sinclair called out to them as they were leaving. “Real men eat nothing but meat … and the occasional Cadbury’s creme egg.”
Ruairi had a quick glance back into the shop on his way out the door. He caught Hamish Sinclair looking straight at him. Ruairi couldn’t move—he was held in the stare. He felt Dani tug at his arm and let himself be led out of the shop. The last thing Ruairi saw as they exited was the giant butcher picking up a tiny phone, and dialling a number. 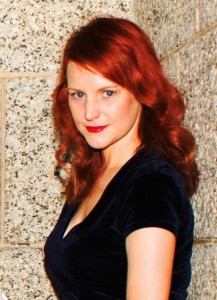 Irish actor and writer Aoife Lennon-Ritchie studied at the Sorbonne in Paris, the Universita di Catania in Italy, University College Dublin in Ireland, and the University of Cape Town in South Africa. Aoife holds diplomas, degrees and a Masters in the multiple fields of business and information technology, English and classic literature, theatre and creative writing; she looks forward to doing her PhD in Film and Media. Always searching for new adventures, Aoife has lived in the UK, France, Greece, Italy, and several US cities, including Chicago, New York and Pittsburgh. She speaks three (and a half) languages. Although she was once an investment banker, she much prefers acting, fencing, writing, and being a mum. She currently lives in Cape Town with her handsome husband and two small children.