Lycanthor the Werewolf by Aiden Storm Book Blitz and Review! 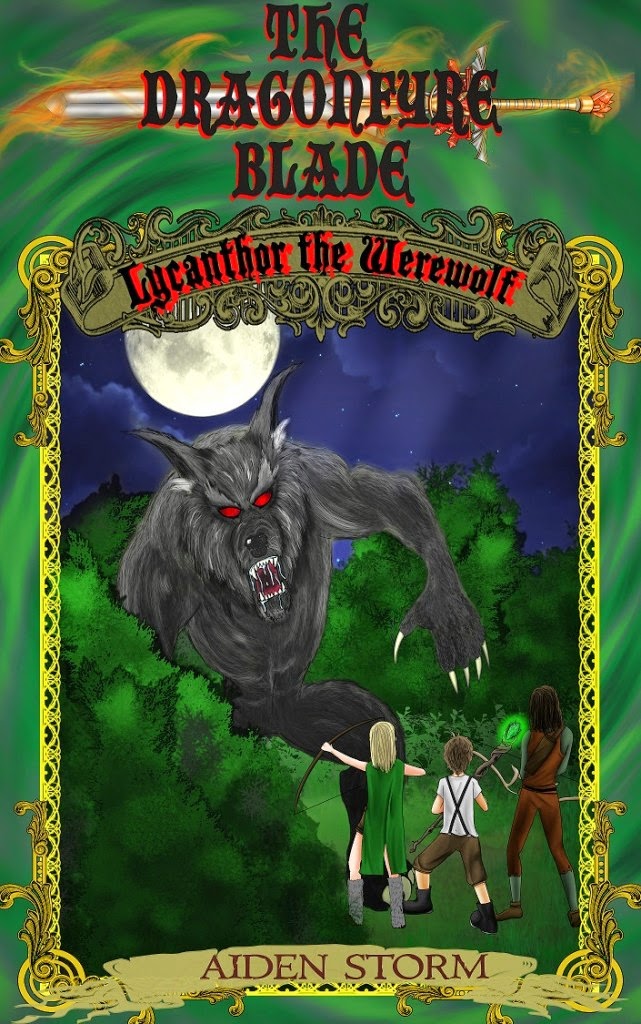 Summary: Thirteen year old Jack is spending the summer at his Aunt’s house in the country. Unfortunately, it’s done nothing but rain and he’s stuck in her old mansion without cable or internet. Bored and alone, he sets out to explore the house. When he reaches the attic, he finds an intricate and unusual mural painted on the walls. Life for Jack gets turned upside down when he stumbles and is transported through a portal into a magical world.

For Jasyra, the daughter of the High King, life couldn’t be worse. Her father has been turned to glass, her kingdom has been taken over by the Demon Emperor, and she and her friend, Evooku, have been exiled. The only way to save the land is to reassemble the Dragon Fyre Blade, but the Demon Emperor has hidden all six pieces and each is guarded by great mythical beasts. There is only one person who can help restore peace, but it has been said that he is not of their land.

When Jack awakens in the Great Forest of Karandur, he encounters Jasyra and Evooku. He discovers the only way home is to band together to fight the evil Lycanthor, a giant werewolf that guards a piece of the Dragon Fyre Blade. But first they have to make it through an enchanted land full of danger.

The Queen of Light appears to Jack and delivers a gift, as well as a revelation. He, Jasyra and Evooku form an unlikely friendship along the way and lasting bonds are made when they realize they are Karandur’s only hope. Will the trio be able to defeat Lycanthor and save the kingdom from an eternity of despair?

The Dragon Fyre Blade: Lycanthor the Werewolf is the first book in a series of six and is written for children 7 – 11 years old.

The Buzz About the Book

“I am eight years old and I liked this book because of how the author described everything so well. It is a very exciting, adventurous and magical story about a 13-year-old boy named Jack and his usual companions as they struggle against Lycanthor the werewolf to get the Dragon Fyre Blade pieces to help them defeat the Demon Emperor.  My favourite part was when the author described the mural painting that Jack fell into. It was unique and painted vivid pictures in my head. The book was magical and interesting to read which made it so much fun. I think this is a great book for anyone who is looking for a magical adventure, and I can’t wait to read the second book!” ~ 5 Star Review, Carolyn, Amazon
“Couldn’t put this book down. I had me on the edge of my seat for the whole book. I read it so fast I was sad when it was over. I can’t wait for book 2!! ” ~ 5 Star Review, Pedroluis, Amazon
“My nine year old son is a fairly reluctant reader but we came across The Dragon Fyre Blade: Lycanthor the Werewolf at amazon and decided to read it based on the reviews. It reminds me a lot of the Beast Quest series of books and has an action-packed approach that my son enjoyed. You find yourself cheering for Jack, Jasyra and Evooku the heroes of the tale. There are several cliff hanger chapters that had my son wanting to read more… A worthwhile read for boys.” ~ 5 Star Review, nickalous, Amazon
“This is an enchanting and amazing book. I read it to my daughter and we both loved it. It is a mythical tale and it is so gripping. The story line is great and the characters are very well formed.” ~ 5 Star Review, PaigeTurner, Amazon
“Aiden Storm has written a book that will no doubt be a hit with 8 to 12 year old readers. The first book in a new series, Lycanthor the Werewolf sees a modern day boy named Jack set forth to retrieve the ancient Dragon Fyre Blade. It’s a lighter read filled with magic, action and a terrifying werewolf. The heroes have to use all their skills and abilities to battle the beast. Highly recommend this book for anyone with boys. It’s a natural choice for reluctant readers.” ~ 5 Star Review, Nita, Amazon

Jack is just a normal kid who is bored when he has to stay at his Aunt Albertas house. That is, until he wanders into the attic and discovers a painting that he just cannot ignore, and when he touches it and it feels real with sand and birds that come to life, he is drawn into a world of fantasy and paranormal creatures. Jack is a very complex character because he is so realistically written and I think most kids would be able to relate to him. The illustrations in the book are amazing - all in black and white but really tell the story and are so in-depth. I won't give away any spoilers, but throughout the book Jack has to dig deep and find his true hero inside, and can teach all of us a lesson. There is some violence in this book, but it is suitable for middle-graders and I would definitely recommend it! Loved it and cannot wait to read the second book in the series.

Most people may not see it the same as me because I have a degree in literature, but to me Lycanthor is a metaphor for life. Jack has to overcome his fears and struggle to win.

About the Author: Aiden Storm

Aiden grew up a city boy, but always loved getting out into the country. As a kid, his great uncle always took him to old castles, famous battlegrounds and long hikes in the wilderness. These days, Aiden lives in old cottage next to the forest with his dog Blade. When not writing Aiden spends time exploring the woods, dead certain they’re full of fantastical creatures, long lost relics and ancient magic…