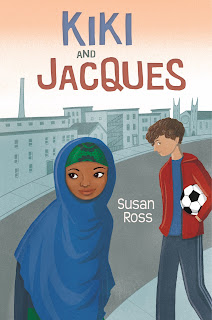 A local boy and a refugee girl from Somalia overcome cultural challenges in a small Maine
town.
Twelve-year-old Jacques meets Kiki, a Somali girl with a mysterious scar. Jacques expects to be captain of the soccer team, by Kiki’s brother, Mohamed, becomes his new rival. Kiki is also a talented player and wishes her family would let her join the girls team. A dangerous older boy implicated Jacques in a blot to rob the Army Navy Store, but Mohamed is mistakenly arrested. The boys on the soccer team shun Mohamed, and Jacques must decide if he will step forward.

PRAISE
“Jacques and Kiki are intriguing chracters, strong and empathetic. Despite problems of culture, they find their way to friendship in a story that is beautifully crafted. A stunning debut novel.”
-Patricia Reilly Giff, Two-time Winner of the Newberry Honor (Lily’s Crossing and Pictures of Hollis Woods) 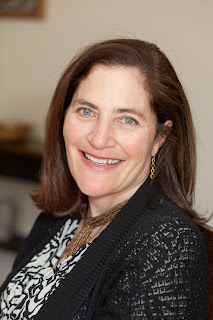 Susan Ross grew up in Lweiston-Auburn, Maine, and adored spending time at her family’s cottage on the maine coast. She attended Brown University and NYU School of Law.
After practicing law, Susan taught legal writing in Brooklyn and in Budapest, and creative writing to kids in Connecticut. She led “art smart” for many years in her three children’s elementary school classes and assited with weekly writing workshops at their international school in London. Susan loves hanging out in a classroom and teaching kids about writing and literature!
KiKi and Jacques was inspired by the large influx of New Mainers from Somalia to Susan’s hometown in Maine. It is her debut middle grade novel.
Currently Susan lived with her husband and teenaged daughter in Connecticut. She teaches writing at Westpoint Writers Workshop and is a trustee at the local library.


http://www.authorsusanross.com/
@SusanRossAuthor
GIVEAWAY
One Winner will get a $25.00 B&N Gift Card
Must be 13+ To Enter | Open To US Only
a Rafflecopter giveaway