Holly Hearts Hollywood is the first book in a series. 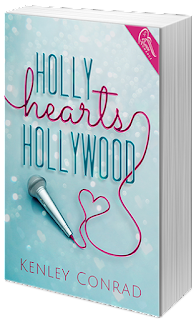 Seventeen-year-old Holly Hart wants to be a star. She moves to Los Angeles from the small town of Cedar Junction, only to hear she’s too fat and ugly to be a famous singer.
But when Shell Shocked Records looks past Holly’s plus-size and less-than-graceful-personality to offer her a recording contract, Holly cannot believe her good fortune. On closer inspection, however, the the record execs want Holly to do all the singing, and a thinner and more beautiful girl, Lacey, would lip-sync and get all the credit. Holly goes for it because after all, she wanted to sing.
Contractually bound to secrecy, Holly is more than happy to sit backstage and write in her journal while Lacey shimmies in the limelight and basks in the fame. Before she knows it, Holly is friends with Serena, the pop-star daughter of a music-mogul, flirting with an intern, and developing a strange half-friendship with Lacey.
When Grayson Frost, the biggest country star in America, and coincidentally, a former school bully begins dating Lacey, Holly hopes that he won’t recognize or torment her.
Through a series of embarrassing and weird events, Holly gets to know Grayson and learns that he is much nicer and more mature than he was four years ago. Holly is horrified when she starts falling for him. When Grayson admits he fell for Lacey’s voice, what is a girl to do when she can’t legally tell the truth at the moment when the truth matters the most? 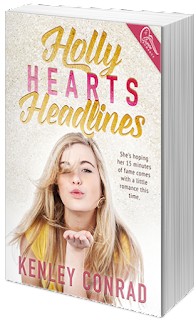 Holly Hart has it all: designer clothes, affluent friends, a recording contract, and she’s dating the biggest pop star in America.

It’s too bad he can’t be seen with her in public. It’s even worse that he seems so very cozy with Lacey, the girl who seems to enjoy stealing Holly’s dream and taking all the credit for their platinum-selling album.

And Lacey? Well she couldn’t carry a tune in a bucket, but that hasn’t stopped her from basking in the glow of the fame and fortune that comes with pretending to be Holly.

Yet, Holly signed a contract vowing to never reveal her true identity as the girl behind the hit songs. Her record label doesn’t want anyone to know their teen dream is really a chubby, insecure girl from Iowa.

Holly needs to focus on finals. She can’t let herself be distracted by the extremely hot and talented Grayson Frost or his prevailing attachment to Lacey. This is the deal Holly made, and she has to honor it no matter how much she hates it.

As if that’s not enough pressure, her grandparents have come to stay, her mom is dating a guy who makes his own deodorant, Shell Shocked Records want Holly to distance herself from Grayson, and she’ll probably end up failing Driver’s Ed.
In a town full of gossip and secrets, Holly wonders just how much longer she can continue to live a double life.

When the media gets a little too close for comfort, both Holly and Lacey are at risk. Soon Holly realizes her dream isn’t only about her and if she is to ever be truly happy, she’ll need to find a way past her insecurities.

Filled with laugh out loud and hold your breath moments, Holly Hearts Headlines is the follow-up to Holly Hearts Hollywood by Kenley Conrad.

From nine to five, Kenley is a home insurance agent. At all other hours of the day she is a young adult author, singer, dancer, cat lady, fangirl, wife, bookworm, and internet enthusiast. Her favorite pastimes include crying over really good books, riding with her husband on their motorcycle, and binge-watching seasons of television shows. When she’s not working or writing, she likes to perform in local community musical theatre productions.