As You Wish by Ja'Nese Dixon Book Tour and Giveaway! 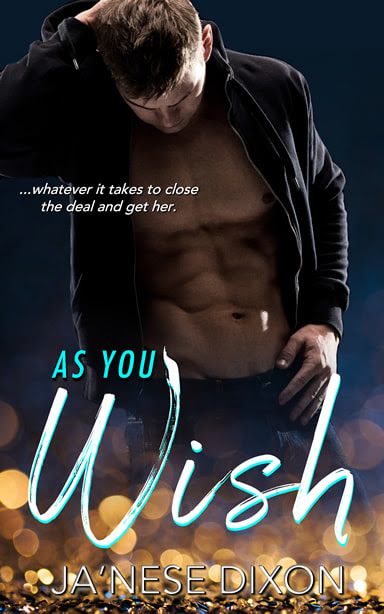 As You Wish
by Ja'Nese Dixon
Genre: Contemporary Romance

Is their simmering attraction enough to defeat their crusades?
Damian “The Shark” Hughes real estate billionaire lands in Houston, Texas to handle a “problem tenant” stalling his partnership with Rockstar Entertainment. But on first sight he doesn’t know which he wants more, to evict her or bed her.
Imani Scott is at the end of herself and her resources for keeping the doors of Harmony Dance open. What she doesn’t have time for is the sweet talking, money slinging gorgeousness from Atlanta. Her sole focus is on her students. They are depending on her and she’s not to go down without a fight.

The blurred line between friend or foe…
Imani organizes a Kwanzaa benefit recital to save her studio not knowing she’s sleeping with the enemy. And Damian is willing to do whatever it takes to close the deal and keep this ebony beauty by his side.
At odds yet drawn to each other by their undeniable chemistry, the ticking clock and a multi-million dollar development deal erect the perfect battleground.
Will they win the battle but lose the war? Or will they let love win?

If you love Black woman White man romances (BWWM) and alpha males with the means and ego to pursue and win at love, then this is the story for you. It contains their happily ever after, no cheating, no cliffhangers, and plenty of heat. What are you waiting for? BUY this book.


"Stop staring at the man and say something?"
Imani found working with Adrianna at the bar was worse than working at the studio. At least at the studio she could pull rank and kick her out the office.
"What man?" She let out a long audible breath.
"The man that has you spilling drinks and stepping on my toes."
“Ouch!” She stomped on Imani’s foot and wiggled out of reach.
Imani had been preoccupied with trying to see the features of his face. The booth he selected was tucked away off to the side. The overhead lights barely illuminated the table top. It was the table repeat customers chose when they wanted to partake of the live music and robust menu and have privacy.
It was public yet private. So private they'd witnessed more than one heated exchange going on in that booth over the length of her employment. It wasn't called the make-out booth for nothing.
Imani stole glances at him for most of the afternoon. She could see the top of his arm covered in a white dress shirt and the swirled tattoo on his forearm. That must be his girlfriend. She reasoned as the olive-skinned brunette took her seat across from him.
"You think that's his girlfriend?" Imani whispered. Adrianna topped off the customer's soft drink and walked over to stand beside her.
"If she's not, she wanna be." She dried her hands on her apron.
Imani faced her, "What makes you say that?"
"That man is a sexual magnet, paid with a Titanium Card, and his eyes," she shook her head and raised her hand in the truth, "panty droppers."
"For real?" Imani hissed. The forced air behind panty made curiosity dance through her veins.
"For. Real." She glanced over at the table as if validating her statement. Her face twisting in agony and she nodded.
Imani glanced back over there. The last thing she needed was to stare into his panty-dropper eyes. She wanted to ask Adrianna more but a warning voice in her head warned her to leave it alone.
There was no room in her life for men. Life was hectic enough without adding sexy, magnetic, panty-dropping men to the equation and her panties needed to stay in place. The last man she'd given her heart passed her up for a bigger fish and left her without so much as a blink of an eye. Her time was better spent trying to find another job.
"Have you heard from your landlord?"
"I got a letter about a new owner. But they didn't mention the balance and I didn't either. I sent what I could, hoping it will hold me over."
$1250 a month times six months left her owing the new landlord at least $7,500. It might as well have been a cool million because she didn't have a hundred dollars to her name. She hated owing people.
She was ashamed to admit what she sent barely covered the late fees but she still had to pay the utilities at the studio on top of her own household expenses.
"How long you think that's going to last? You can't keep doing this to yourself. This dance studio is like a leech draining you dry."
“Why would you say that? What’s wrong with giving my students culture?” Imani stiffened at her harsh analogy.
"Ain't nobody got time for that!" She turned to Imani tossing a towel in the sink. "Culture won't feed you and pay your bills."
Tears stung her eyes. But she didn't have time to cry or feel sorry for herself. She needed a plan.
"Is he cute?" It was better to talk about the panty dropper than her landlord.
It was Adrianna's turn to shrug, "He's alright for a white boy. You know I like my papi chulo sun kissed, bilingual, and Spanish in his blood. Can't have my momma passing out on me."
"Indeed, your mom would pass out if you brought anything but a Hispanic man home." Imani laughed.
"That's why I keep my business my business." She tossed her blonde hair and headed to the other end of the bar to check on a customer.
Adrianna talked a good game but she had a man. Her traditional ways went to her core from cooking authentic Mexican food to Salsa dancing every Thursday night. Imani looked back at his exposed skin, it didn't look white but not brown either. More like a warm beige. His head turned in her direction and she felt trapped. Unable to look away, but unable to see his face either.
The young lady returned to the table and Imani spun around, facing the mirrored wall behind the bar. She glanced up into the reflection and watched him lean forward. The light caught his profile with his thick wavy dark brown hair. He smiled up at his companion.
Imani's stomach clinched. He had a deep dimple.


She watched the young lady leave the table carrying her purse and shoulder bag. They must be done for the afternoon. She wanted to see this mystery man for herself. 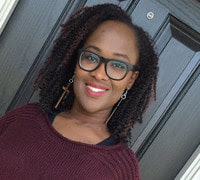 Ja’Nese Dixon writes tales of romance laced with strong women and stronger men. My happily ever afters are meant to inspire. So, if you’re looking for a page turner that will leave you blushing, with your heart racing, and lying to yourself about reading “just one more chapter” then grab a book.
She is an avid reader and coffee drinker, who also loves to run, cook, and quilt (and not in that order). Her ultimate goal as a writer is to give you a little “staycation” with every story.
Ja’Nese calls Houston home with her husband, three kiddos, and a four-legged diva dog. Visit her website at http://www.janesedixon.com if you enjoy romance, suspense, and good sweet & spicy stories that inspire.