First they destroyed his ship, and then they killed his partner and marooned him on a planet of cannibals. But that last one was their mistake. You don’t kill one Space Ranger and leave his partner alive.
Lieutenant AYA is an attractive woman in a man’s world, commander of a mercenary regiment’s artillery. She confuses masculinity with effectiveness, and denies her femininity. Women are soft, sweet and therefore ineffective. Romantic relationships are for the weak.
Marooned on a planet of cannibals as the clock ticks down on the deaths of billions, can a couple who avoid relationships, work together to save the people of the Cannibal Planet from certain death? Find out in Cannibal Planet! 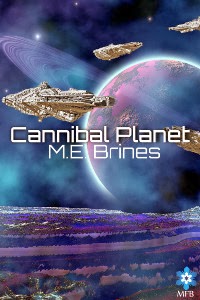 ~Excerpt~
I knew it was going to be one of those days when the warning panel lit up like a holiday display before we’d even been in-system ten seconds. Missiles were blossoming into existence all around us and we’d been painted by at least a dozen sensor beams before I even had a chance to swear.
As my hands danced across the control panel bringing the thrusters on line I called to my partner.
“Hey, Kid! Fire up the laser turret in point defense mode, will ya?”
He threw some switches on the weapons panel and asked, “But where are they all coming from? We’re the only ship around.”
“Minefield,” I said, twisting the ship out of the way of a missile, then corkscrewing down towards the planet’s surface. The kid was thrown from his chair.
“Kid, I keep telling you to strap in whenever you’re in a control chair.”
He crawled back toward his position. “Yeah, I know. But how was I to know that we’d fly right into a shooting war four seconds out of jump space in a supposedly peaceful star system?”
“That’s why you always use the restraint harness. By the time you know you’re going to need it, it’s too late.” I shook my head. It was so much easier just to work alone.
We dodged to port and a missile shot past us, its exhaust leaving scorch marks on our hull. He’d almost reached his chair but was thrown again by the sudden movement, rolling across the little control room of the scout ship. Our inertia-dampeners just weren’t quite up to the violent maneuvering I was putting them through.
The sensors displayed an automatic distress signal from a coastal location near the spaceport. Somebody else must have had trouble with the mines. I turned our nose towards our compatriots in misery and punched the thrusters, diving into the atmosphere.
The tracking board began screaming and flashed three missiles closing the range on converging tracks.
“Frack!” I said. “Hold on!”
We spun like a drunken dancer, dodging one. Our laser took out the second but the third punched right through our hull with a dull bong I could feel through the deck. The damage control panel switched its primary color scheme from green to red and my control stick went limp. I hit the release button on my harness, grabbed my suit’s helmet and headed for the door.
“Abandon ship, kid.”
He scrambled to his feet. “But we’ve still got power.”
“Yeah, but the maneuver drive’s toast. That means we’re a sitting duck. It’s only a matter of time before a missile gets past our point defense to finish the job.”
I twisted my suit’s helmet in place over my head and activated both the radio and the outside speakers, then slid down the ladder to the deck below without bothering with the rungs. The kid snapped his own helmet in place and followed me down, but then made a move toward his cabin.
I ran the opposite way toward the cargo hold. “No time!” I called back. “We’ve only seconds to get clear.” And if the next missile took out our fusion bottle this planet would suddenly find itself with a bright, shiny new sun, but not for very long.
Inside the hold I grabbed the backpack I kept stocked with emergency supplies and tossed it into the cargo compartment of the air raft.
“Evacuate the cargo hold.” I told him and started releasing the restraints holding the vehicle to the deck. He punched buttons in a sequence on the control panel by the hatch, then ran to the open cab of the air raft and hopped into the passenger seat.
I threw off the last restraint as the outer hatch began to slide open, sucking the final wisp of atmospheric pressure into the void. Outside, the planet whipped by twice a second as we spun out of control into the atmosphere. If it hadn’t been for the dampeners we’d have been pinned against the wall like insects waiting to be swatted by the next missile. I threw myself into the control seat, hitting the start button with one thumb while my other hand buckled the restraint harness across my body.
“Hang on, kid.” I punched the accelerator and that was the last I ever saw of him.
The air raft shot out of the cargo bay like a missile from a launch tube but when we hit the slipstream roaring past at thousands of kilometers an hour we began tumbling like a leaf in a typhoon. He hadn’t buckled up and vanished from the passenger seat, taken by the wind and the forces of gravity.
I was alone. Again.
------------------------------------------
Buy Links: Amazon      Crimson Frost Books

------------------------------------------
~About the Author~
M.E. Brines spent the Cold War assembling atomic artillery shells and preparing to unleash the Apocalypse (and has a medal to prove it.) But when peace broke out, he turned his fevered, paranoid imagination to other pursuits. He spends his spare time scribbling another steampunk romance occult adventure novel, which despite certain rumors absolutely DOES NOT involve time-traveling Nazi vampires!
A former member of the British Society for Psychical Research, he is a long-time student of the occult and a committed Christian who sees himself as a modern-day Professor Van Helsing equipping Believers for battle against the occult Principalities and Powers that rule a world in darkness. (Ephesians 6:12)
The author of three dozen books, e-books, chapbooks and pamphlets on esoteric subjects such as alien abduction, alien hybrids, astrology, the Bible, biblical prophecy, Christian discipleship, conspiracies, esoteric Nazism, the Falun Gong, Knights Templar, magick, and UFOs, his work has also appeared in Challenge magazine, Weird Tales, The Outer Darkness, Tales of the Talisman, and Empirical magazine.
Author Links:  Site     Twitter     Goodreads