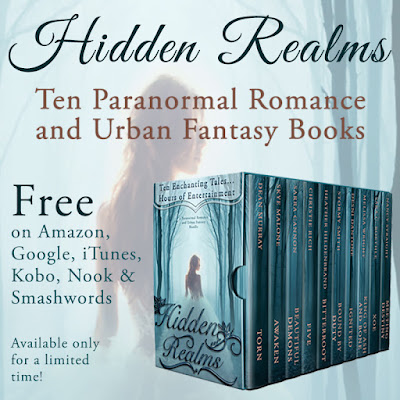 Strong, independent heroines join together with mysterious, dangerous heroes in explosive conflicts that are as much external as they are internal.

Hidden Realms has all of this along with mermaids, shape shifters, demigods, fae, demons and half-breeds with even darker inheritances. There's love, both forbidden and true, and there's all the sacrifice it takes to keep it. Regardless of what your preferred flavor of paranormal romance or urban fantasy actually is, there is something in this collection of 10 novels that will knock your socks off.

Hidden Realms contains multiple books that are otherwise only available for $2.99 or more, and it's available for FREE—but only for a limited time!


Torn by Dean Murray
Shape shifter Alec Graves has spent nearly a decade trying to keep his family from being drawn into open warfare with a larger pack. The new girl at school she seems to know things she shouldn't about his shadowy world, and the more he gets to know her, the more mysterious she becomes.
Is she an unfortunate victim or bait designed to draw him into a fatal misstep?

Awaken by Skye Malone
Chloe had never been to the ocean, and now one simple vacation has altered her life forever. Her body is changing in bizarre ways, a mysterious boy is following her, and she's become the target of killers too. Ancient and deadly secrets surround her and it's going to take everything she has to discover the truth.

Beautiful Demons by Sarra Cannon
Harper moves to Peachville hoping for a fresh start, but when evidence ties her to the gruesome murder of a Demons cheerleader, she discovers this small town has a big secret.

Five by Christie Rich
Rayla Tate dreams of escaping her ordinary world for a bright future in the art world. Throw in an overbearing aunt who is keeping major secrets, a disgruntled best friend tagging along to college, and a bunch of fae warriors waiting in the wings to claim her the minute she leaves her sleepy little town, and Rayla’s dreams are about to shatter.

Bitterroot by Heather Hildenbrand
Charlie and Regan Vuk have secretly always wanted a sister. Now, they finally found each other, only to be forced into a head to head contest for pack alpha. A competition that threatens to destroy their new bond and 1 sister’s chance for true love. Bitterroot is a 3-part Young Adult Paranormal novella series with a dose of sibling rivalry... Who will you root for?

Bound by Duty by Stormy Smith
Amelia Bradbury is the last living Elder. She has power she can’t control, a prophecy dictating her fate, a betrothal she can’t stop and a heart lost to a human.

Ignited by Desni Dantone
When evil forces come for Kris Young, she is forced to go on the run with the young man she has long considered her guardian angel. As they search for the truth behind her role in the long-running battle between good and evil, they discover that nothing is as it seems, and nothing, least of all their hearts, are safe.

King of Ash and Bone by Melissa Wright
When monsters break through the veil between worlds, Mackenzie Scott devises a plan to stop them, whatever the cost. She finds an injured stranger who just might hold the key, but he's not the helpless boy he appears to be. He's one of them, and he's got plans of his own.

Xoe by Sara C. Roethle
Xoe never thought she’d be the type of girl to contemplate murder. Of course, she never thought she’d be dealing with werewolves on top of her own strange, budding powers. Everything comes crashing down at once when her best friend’s life is put in peril, and Xoe will do whatever it takes to save her, even if it involves trusting a tall, handsome vampire with an infuriating attitude.

Meeting Destiny by Nancy Straight
Lauren is visited in her dreams for years by a stranger claiming to be her destiny. Destiny becomes reality when paths cross during a failed robbery attempt.


Let this Friday the 13th be your LUCKY day! Download the box set now to get TEN free ebooks!

*Hidden Realms is free for a limited time, and was free at the time of this posting*